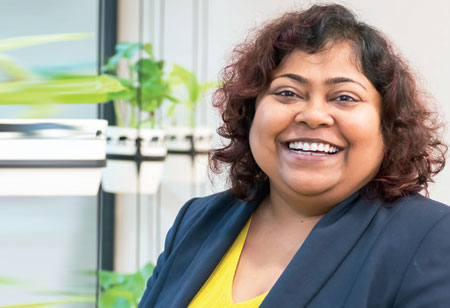 Anjana has been associated with IndiaFirst for over five years now, prior to which she has handled key roles across an array of companies that include ICICI Prudential Life Insurance,SBI Life Insurance, Universal Sompo General Insurance, Oracle, and EY, to name a few.

What we witness today is a world which is evolving and adapting itself to the disruptions caused by the emerging and changing technologies. The consumers too have been forthcoming in embracing the innovations brought by these technologies to ease our day-to-day lives. From an era of smart devices to connected devices to connected experiences, we as consumers have played a critical role in making the impact of these technologies more profound by adapting to the tech led innovations, and being willing to allow the tech enablers to gather more data for improvised and personalized experiences.

The immediate future is all about leveraging the power of AI, AuT, IoT, AR and VR to revolutionize most of the industries be it manufacturing, supply chain logistics, retail, education, healthcare or financial services. In this article, I will cover a few use cases of these technologies working together to simplify our lives.

Autonomous Things (AuT/AuIoT)
As we all know autonomy is all about the ability to take informed and independent decisions and related to it is autonomous self governing. Autonomous things are all about adding an edge to automated process or automated operations by clubbing them with the power of AI to enable informed decision making and removing human intervention from operations. Autonomous things have the power of transforming multiple industries like manu facturing, healthcare, vehicle, defence services, emergency response systems, retail, construction, education and more.

The Indian Agriculture industry has a large potential to transform itself with the power of Autonomous Things. The farmer community can reap its benefits by innovating the entireagri eco system with Smart Sowing Vehicles which can sense the perimeter of the farm without the intervention of farmers. It can automate sowing of seeds and cutting of crops, smart vehicles & drones can be connected with weather forecasting systems and can be enabled to inspect, monitor, spray insecticides, and buying & selling recommendations can be enabled via farmer's app. Crop insurance also can be enabled, and claims too can be settled with the help of autonomous things. It has the potential to revolutionize the farming industry.

Defence Services can leverage the Autonomous things in a big manner to come with fully automated vehicles for patrolling and surveillance equipped with thermal imaging sensors and the ability to trigger an attack. It will ensure the safety of our army staff as well. Autonomous things will impact Emergency Response Drives, Evacuation drives, distribution of medicines to cyclone or
flood affected areas. It will ensure materials reach without delay. Smart city and elderly care are other areas where Autonomous Things has a wide spread role to play. Its scope will continually increase in the immediate future.

Defence services can leverage the autonomous things in a big manner to come with fully automated vehicles for patrolling & surveillance, equipped with thermal imaging sensors and the ability to trigger an attack

Increased Use of AR/VR
We have been talking about immersive experiences which can be enabled by VR, but have been largely used by the gaming industry. In the current times of study from home, AR/VR can be applied to make the learning experience very immersive. Owing to the lockdowns, students can experience physics and chemistry experiments without being physically present in school labs. Anywhere learning can be made interactive and effective with the deployment of the AR/VR technologies. This comes handy for engineering and medical students as well. Besides this, interactive user manual for home appliances, vehicles, vehicle claims investigation, retail shopping experience in the current pandemic scenario can be enhanced by augmented/virtual reality.

Blockchain
Another emerging technology which is poised to create a profound impact on various businesses is Blockchain. This technology is all set to transform the banking and insurance sector to operate in an efficient manner and impact the health providers in a major way. All patient medical records s can be maintained in a secure manner, and the same can be accessed by various eco system providers like insurance companies basis customer consent. It also can enable event based notifications for insurers to initiate claims processing e.g., Cashless Mediclaim registration to be initiated every time a patient checks in to the hospital. While admitted in the hospital he/she succumbs to the disease, insurance carriers can automatically be notified without any intervention. This proactive notification then automatically triggers claim processes. Blockchain tech can transform the way our electoral polls are conducted by enabling transparency in polls. Other areas of our lives which can get impacted by this technology are the real estate buy and sell result in reduction of lengthy transactions.

Voice Technology
While we see the emergency of voice based bot slowly taking over outbound calling, IVRS handling and inbound calls, voice technology has the potential to emerge as a new interface and can displace the existing GUI interfaces in a big way. It minimizes the efforts taken by the customer to reach out to the organization for help. Voice command enabled personnel devices are already in vogue. To provide a differentiated experience for their customers, enterprises will soon start assigning personal assistants to customers which are controlled by voice commands.

Voice technology also paves way for conversations to take place in regional languages, which can be leveraged by financial institutions and insurance companies to increase their outreach to a larger population base who are not literate.
Read More: