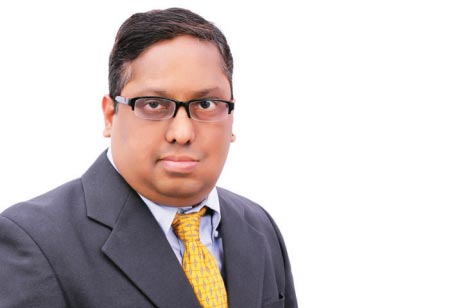 Having completed his Bachelors in Engineering from National Institute of Engineering, Girish has been associated with Mindtree for almost two decades to now, prior to which he held the role of Sr. Engineer at Siemens.

Dear CEO, you are productive with an effective C-suite. You have assembled an eclectic group of COO, CFO, CIO, CMO, CSO, CHRM (now often referred as CPO) and other distinguished CXOs. Allow us to introduce a new member to your team – CAIO, Chief Artificial Intelligence Officer. CAIO, unlike the other CXOs, as you may have rightly seen it coming, is not actually a human. She is a bunch of 1s and 0s called algorithm.

This is not unprecedented. Hong Kong venture capital management fund, Deep Knowledge Ventures (DKV), has appointed an algorithm named VITAL (Validating Investment Tool for Advancing Life Sciences) as an equal voting member on board investment decisions. You are aware of high frequency trading algorithms ‘employed’ in financial firms. VITAL is the smarter next generation kid of these algorithms. Permit us to answer some of the questions you may have.

What are her qualifications?
Her predecessors were already making waves since 1950, attempting to mimic human behaviour. Alan Turing was among the first to delineate this clan of intelligent beings through his Turing test. She, named Artificial Intelligence (AI), was born in 1955 as an independent faculty at Dartmouth College, New Hampshire, US. A prodigy, she was already beating humans in checkers, solving word problems in algebra and proving logical theorems by the time she was 18. She received funding by Department of Defence to be part of several universities and laboratories around the world. Her one of the early successes was as expert system to mimic knowledge and analytical skills of human experts. In 1980, she specialized in Artificial Neural Network and further in Deep Learning in 1986. She is multi-skilled, making use of diverse fields such as statistics, economics, and mathematics for her cognitive reproduction. Her large family with super and sub-specialisation has made a mark in businesses including retail, consumer goods, media, telecom, entertainment finance, healthcare, manufacturing, automotive and aerospace, garnering $1.58 billion in 2017, expected to reach $20.83 billion in 2024. While this is for an industry, for one company, VITAL, the AI board member introduced earlier, is credited with saving DKV from going bankrupt by advising against investing in overvalued projects.

What makes her fit for C-suite?
You may already be using her sister Alexa or brother Maps. Your company may be making use of her pedigree
for automation, media recognition, analytics or fraud detection. It’s time for her to step-up. In the C-suite, she is your polymath. She gives you reasons to take strategic decisions decisively. She can find answers for your routine and wicked questions.

Want to know the expected revenue for the next quarter? She can forecast that for you. Want an insight into pricing your new product? She can give her view. Want to recommend a new business line to the board? She can give you pros and cons. Want to find ways to cut costs? She could help find a few which you had not noticed. She is here to help boost sales, improve marketing strategies, cut costs and analyse data. She does these by running through boggling amount of data, so it gives you confidence the answer is logical and data-driven.

What are her weaknesses?
How do I address them?
Being a non-human, she has inherent limitations. She lacks the necessary human touch and emotional intelligence. She can only do what she is taught to do and learn what she is taught to learn. If a pandemic is affecting your employees, they need a human to allay their fears; a machine cannot do that.

CAIO, unlike the other CXOs, as you may have rightly seen it coming, is not actually a human; she is a bunch of 1s and 0s called algorithm

She can take the best decisions only with data and learning skills she is equipped with. A pandemic affecting your business ecosystem likely brings down the revenue. If she is not trained or has not learned about pandemic, she cannot consider pandemic a factor when giving her views. Her autonomous car driver cousin was involved in death of a pedestrian in 2018. The autonomous car driver seemed lacking in awareness to brake in time considering all involved factors – riding speed, obstruction gap and stopping distance.

On the other hand, your CAIO may learn a few things that were not intended. At Facebook, chatbot twins talking to each other made-up their own gobbledygook. Before they could run amok, their masters shut them down. So, one, she is not human and not expected to be; two, you need to know what she knows and doesn’t know; three, you are her boss who controls her learning and growth.

I have heard AI is not transparent in its results. How do I get more insights into her thinking?
You heard that right. She comes-up with measured conclusions, but may not be able to explain what made her arrive at them. She is a black box in that sense. Her makers recognize this is a shortcoming and are teaching her to explain her outcomes with Explainable AI (XAI). With this capability, she can tell you she expects lower income next quarter due to a hurricane expected near a supplier’s plant. You can then take a corrective action to reduce dependency on the said supplier.

Dear CEO, shall we prepare to welcome CAIO to the C-suite?
Read More:

Digital Dronacharya - The Internet Of Skills