With more than 3.5 lakh patients-footfalls annually, AMRI Hospitals Ltd. – a premier private healthcare provider based out of Kolkata – is one of the busiest healthcare centers in the entire Eastern India. The group has three super specialty hospitals at Dhakuria, Mukundapur, & Salt Lake in Kolkata, and another super specialty hospital in Bhubaneswar, Odisha. Boasting of a fleet of 5,000 healthcare professionals, including more than 600 doctors and a well-trained force of nursing staff, AMRI, backed by advanced technologies and the latest equipment and with more than 1,000 beds across its four hospitals, conducts more than 15,000 successful surgeries annually.

Turning back the pages, AMRI’s legacy originally takes us back to the last decade of the 20th century. In the early 90s, the Government of West Bengal was in pursuit of a private operator who could assume the charge of a state owned polyclinic at Dhakuria, Niramoy. The opportunity came into the hands of Emami Group, and without much delay, the group established a super specialty hospital. In 2009, after almost two decades, the hospital’s name was officially changed to AMRI (Advanced Medicare & Research Institute) Hospitals Limited.

Today, AMRI Hospitals brings to the table a class of its own, which makes the group one of the major players who keeps Eastern India ahead of the curve. The hospital is rich with a committed team of doctors and caregivers who are well trained to approach the patients empathetically and take up the challenge of treating the most
complicated cases, besides stepping up to handle Emergency and Critical Care. Their dedication, expertise and compassion
combined with the guidance of Rupak Barua (Group CEO & Director) make a real difference to the world of healthcare. AMRI today makes immense contributions to the lives of people, not just from Kolkata and the rest of Eastern India, but also from other parts of South Asia and the world. With the prospect of exploring more about the hospital’s vision and propositions, CEO Insights indulges in a conversation with Rupak.

All our endeavors are towards our goals, preserving the trust, having the clarity of vision, ensuring precise delivery, and being informed while taking strategic decisions

The healthcare technology is lightning fast on the global arena. How do you match these dynamic trends?
We are constantly upgrading our process and facilities with the introduction of changes to infuse the Group with new vigor and building with world class technologies. We provide our patients with tertiary level clinical care, which is backed by a multidisciplinary team of medical fraternity who have access to the finest state-of-the-art technologies.To ensure the accessibility of the latest facilities to a wider range of people, we have also launched special highly affordable packages in the most common areas like Angioplasty, Angiography, Valve replacements, and Knee & Hip Replacement. In addition to this, we earmark a significant amount of investment to our research division, which helps us to propagate the transfer of latest knowledge as well.

What’s the contribution of the management layer towards enhancing these world class deliverables?
All our endeavors are towards our goals, preserving the trust, having the clarity of vision, ensuring precise delivery, and being informed while taking strategic decisions. We are quite confident, knowing the fact that the Group’s ethos of providing best quality services at competitive rates is managed by professionals
of the highest order. They make a difference. We are extremely happy to divulge that we are on a great growth track.

Setting new quality benchmarks is an important aspect of the organization’s growth. How do you achieve this?
Yes, it is. We recognize our patients’ needs and always strive to meet their needs and expectations. The best way to achieve that is to comply with the benchmark of national and global level of practices. We do this through constant development, improvement and training. We maintain a transparent quality system, as per the requirement of accreditation authority and with respect to the purpose of the organization. Our vision is to be cherished as the best place to come for care and the best place to work, which is implemented at all levels.

How do you contribute towards fulfilling your responsibilities towards the well being of financially backward society living in the city?
We constantly organize Free Health Camps, especially in and around Bhubaneswar & Kolkata. For promoting a healthy life & lifestyle among the people, the renowned doctors of AMRI Hospitals from various specialties also render periodic informative Health Talks across various residential complexes in the cities.

What’s the future roadmap set for your hospital?
We have initiated business process re-engineering with a focus on the group’s integrated functioning, rather than operating in a discrete manner. We indeed have major changes and developments on the cards, since the group is well projected towards a path of steady growth. We are all set to adjoin around 700 beds in the near future.

Key Management:
Rupak Barua,Group CEO & Director
A wellknown name in the healthcare sector in India, Rupak is a Post Graduate in Marketing and an MDP graduate in Hospital Management from IIM (Ahmadabad) and IIM (Bangalore). In a career spanning more than three decades, he has led several teams across major corporate hospitals across Kolkata. 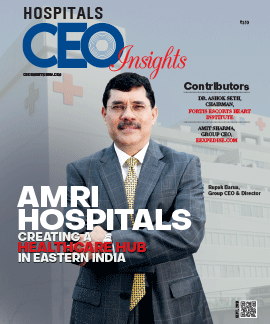