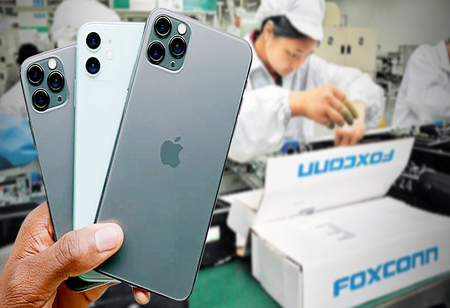 Recently, Apple supplier and the world's biggest contract electronics manufacturer Foxconn, said it is hiring 2 lakh more workers by the end of September to manufacture the new iPhone 13 lineup.

According to the reports, 200,000 additional workers are needed at Foxconn's iPhone factory in the Chinese city of Zhengzhou, ahead of the expected launch of the iPhone 13 lineup next month.

The general manager of Foxconn's Zhengzhou plant Wang Xue, said, “The staffing employees have become the biggest bottleneck for the company. He believes that it will be able to hire 200,000 new hires by the end of September at the current speed of recruitment."

Zhengzhou facility is the world's largest iPhone factory it can put up as many as 350,000 rally line workers and manufacture up to 500,000 new iPhones every day.

The forthcoming series would back 25W fast-generation technology. The current generation of iPhones, as well as USB C power adapter, only support 20W of fast charging.