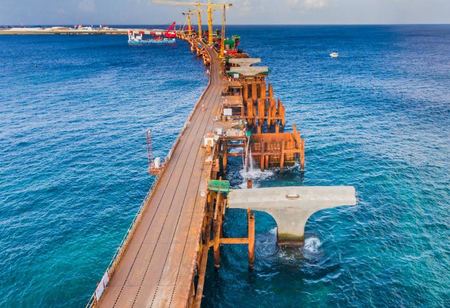 Recently, Afcons, the engineering and construction arm of the Shapoorji Pallonji Group, has won a USD 530-million contract to construct the largest-ever infrastructure project in the Maldives.

The Male-Thilafushi link project, popularly known as the Greater Male connectivity project, is funded by the Exim Bank of India under the Indian grant and line of credit, the 156-year-old Shapoorji Pallonji Group.

The statement said, “The USD 530-million project contract was signed between the Republic of Maldives and Afcons on Thursday, and the construction has to be completed within 32 months. However the company did not say when it is likely to begin the project. The project includes a 6.7-km bridge and a causeway network connecting Male, Villingili, Gulhifalhu and Thilafushi islands of the Indian Ocean nation.”

The Maldives government deliberates the project to be a national economic engine and a lifeline linking Hulhumale, Hulhule and Male with the proposed Gulhifalhu Port and the Thilafushi industrial zone.

S Paramasivan, Afcons managing director, said, “This is by far one of the largest line of credit projects secured by Afcons which is being funded by the Exim Bank of India. The project, a symbol of the India-Maldives ties, will help transform the Maldives into a more economically resilient nation.”

Afcons, which functions in over 20 countries, has constructed some of the landmark mega projects globally, including the Atal Tunnel, which is the world's longest highway tunnel 10,000ft above sea level in Kashmir, the world's highest single-arch railway bridge in J&K (ongoing), the Lusaka City decongestion project in Zambia amongst others since the past six eras.

Afcons has involvement in infrastructure development in the Indian Ocean region like the Ambatovy port expansion for nickel mining in Madagascar, and progress of various marine infrastructure facilities in Mauritius.