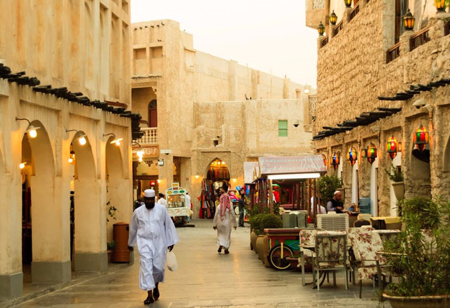 The Covid-19’s catastrophic impact on the Middle Eastern business landscape is going to be long-lasting. According to the estimates of the IMF, the Arab region’s economic contraction stands at 4.1 percent, which is not far from World Bank’s anticipation that implies a long U-shaped recovery.

But the Middle Eastern countries are performing better than what the business world expected, and a significant part of this owes to the strict vaccination policies and covid-19 rules prevailing in the region, especially in the countries like the United Arab Emirates (UAE), Qatar, Iran, Qatar and Oman. The UAE, in fact, leads the world with its impeccable vaccination program that has already vaccinated 100 percent of its population with at least the first dose.

Vaccination Programs Fueling the Fight Back

On the other hand, Qatar, even with the FIFA World Cup 2022 around the corner, is enforcing strict vaccination policies. The country boasts around 80 percent complete vaccination. Currently, the vaccines approved by the Ministry of Public Health of Qatar include Pfizer, Moderna, AstraZeneca, and Johnson&Johnson. In addition, a couple of months back, the country also added  Russia’s Sputnik V and China's Sinovac to the list of conditionally approved vaccines. Conditional approval implies that individuals who receive two doses of the respective vaccine, after at least 14 days, one dose of vaccine from Pfizer and its BioNTech or Moderna, will be considered fully vaccinated. It doesn’t end there. People who are  vaccinated with two conditionally approved drugs need to pass a blood test to detect antibodies to coronavirus before traveling to Qatar.

Planting new thoughts and creating new markets will be a crucial part of the recovery. Kuwait, in that regard, is an excellent case in point.

Such strict policies are however having a significant impact on the middle eastern business landscape. And it’s been an elixir, all things considered. Because, it’s a tangible fact that the traditional industries in the region suffered the most during the pandemic. For instance, the travel and aviation sectors have witnessed a major slowdown. That’s why increasing vaccination is an elixir. Even though the chances look better only for a partial economic recovery this year, still there is a positive milieu and optimism prevailing amidst the business leaders in the region, which is a great omen.  With businesses slowly coming out of their panic-mode, there is an increasing level of optimism among consumers as well, despite 62 percent of households experiencing contraction in their income. It’s also quite safe to say that the catalyst to the recovery will be new entrepreneurs and entrepreneurial vision.

Planting new thoughts and creating new markets will be a crucial part of the recovery. Kuwait, in that regard, is an excellent case in point. Ever since the dawn of the new millennium, Kuwait has exhibited commendable strength in its growth trajectory, ensuring the welfare state of its nationals, who today savor a very high per capita income. But recently, the country’s economic growth, which was already slow with a 0.4 percent increase in 2019 after the decrease in oil prices, took a huge blow with the arrival of the pandemic. The country even suffered  a nose dive of its economic growth to -8.1 percent in 2020. But interestingly, the country is expected to regain the momentum with 0.7 percent growth this year and 3.2 percent in 2022, depending on the post-pandemic global economic recovery, according to the IMF. In addition, the Government spending, alongside increase in employment and credit growth are also expected to contribute to the fresh growth in the short term; nonetheless, this will depend on stable oil prices. On the flip side, the country has been quite successful in engendering successful entrepreneurs who have created their own markets.

Talal Al-Ajmi, Founder & CEO, VI Markets, is one among them, and it’s exemplary the way he has done it. Despite the slowdown prevailing in the stock market after the pandemic, there is still a sense of flare with the way stock markets & investments are getting democratized the world over, thanks especially to the increasing number of young investors. According to a report by PwC, some degree of investor confidence is returning as reflected through the five IPOs in Q1 2021 in the region. Recognizing the knowledge gap that comes along with the increase in investors, Talal emerged as a leader by creating a unique online trading ecosystem in Kuwait through his venture – VI Markets. Having partnered with London-based, Financial Conduct of Authority (FCA) approved online broker platform ‘One Financial Markets’, VI Markets provides investors in the Middle East with tailored online trading services that enable them trade forex and contracts for differences (CFDs) on indices, commodities, energies, bonds, and futures. In the process, the company creates further investors.

“The pandemic was an opportunity to reach a larger number of customers because a lot of people staying at home looked for alternative methods that generated income. That’s why the crisis turned out to be a great opportunity. My team was ready at the right time to serve them with the same quality working from home and we have moved a step ahead by not only providing all our workshops and seminars online, but also ensuring one-to-one meetings and follow ups. In other words, a pandemic was no excuse to fulfill our responsibility to cater to the needs of our clients,” says Talal in an exclusive with our editorial team.

He has also effectively deployed marketing campaigns across several countries and geographical regions. “Our customer base has grown multifold during this crisis. Today, we serve a large number of customers in the Gulf & Middle East and we expect to have a global presence soon,” he adds.

While a fair amount of responsibility falls on the shoulders of the entrepreneurs, on the other hand, Kuwait’s public finances were showing healthy traits until 2020, with a debt-to-GDP ratio of 11.5 percent that year. But the pandemic didn’t spare this either, as it has decreased the expectations to 13.7 percent in 2021 and 27.3 percent in 2022. Going forward, government spending is also expected to increase as a plan in order to boost credit, employment and wages, while the tax collection remains low as the government has delayed the introduction of a VAT.

As the Middle East continues to fight, it’s becoming increasingly clear that the recovery would take time in the region, just like the rest of the world. Smart operational strategies would reduce it together, while significantly leveraging IT as well. The Arabian companies should keep their focus on the dynamic technology world and bring home the right technologies to propel the growth factor.