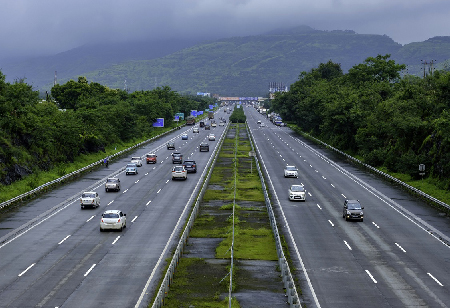 Most engineers possess a unique mode of thinking based on seeing everything as a 'system.' Union Minister Nitin Gadkari is often mistaken as an engineer for the same reason—his ability to look at the country's whole infrastructure development scenario as a system that can constantly improve. It's not only that Gadkari is not an engineer; on the contrary, the current Minister for Road Transport & Highways is a lawyer by qualifications who completed his M.Com. and L.L.B. from Nagpur University. The new infra-man of India is also the longest-serving Minister for Road Transport & Highways, currently running his tenure for over seven years.

What makes this new Infra-man of India unique?
It is a multivariate equation. Something that catches immediate attention is the pace of road construction carried out in the country at the moment. According to the data divulged by the National Highway Authority of India (NHAI), the annual average construction of national highways has recorded an 83 percent spike compared to the pace of highway construction before his time. The numbers show that the annual average construction of highways was 4,918KM during 2009-2014, which implies 13KM per day. In FY21, the NHAI targeted to construct 11,000KM of the highway by covering 30KM per day. But as one of the firsts when it comes to infrastructure projects in the country, the actual construction exceeded the target and completed 13,327KM in the year— 21 percent higher than what was targeted. India is now constructing 37 KMs of national highways per day!

However, the aforementioned is just the tip of the iceberg when it comes to the pioneering aspects of NHAI's latest endeavors. A few months ago, NHAI had hit the spotlight by setting a record by laying 25.54 kilometers of road in a short span of 17:45 hours on the Solapur-Bijapur section on National Highway 13 with the help of its partner IJM India Infrastructure Limited. Completing 340.8 km long, 6-lane wide Purvanchal Expressway, India's longest expressway that incorporates a 3.2 KM long emergency Airstrip in an impressive 36 months, and inaugurating it by landing a C-130 Hercules plane carrying Prime Minister Narendra Modi—NHAI now works on a different level. If that's not fast enough, while building an airstrip for the Indian Air Force (IAF) took 1.5 years previously, Gadkari's NHAI now does it in just 15 days! The man himself recently said while speaking at the inaugural of an emergency landing strip for IAF planes on the Satta-Gandhav stretch on National Highway 925 in Barmer, "IAF chief RKS Bhadauria had said it usually took one-and-a-half years to build an airstrip. I told him that we will construct these for you in 15 days with good quality."

NHAI Underwent a Paradigm Shift?
The answer to this question lies in the minister's tech-savvy mindset that triggered the organization's complete digital transformation. Traditionally, one of the largest stumbling blocks to NHAI's delayed road construction projects in India has been the red-tapes and bureaucratic delays; not to mention the delay in land acquisition that majorly accounts to the delay in compensation disbursement. NHAI migrated to the cloud to completely eradicate such delays and deployed Data Lake Software specifically to track files and pinpoint officials behind delays in disposing of matters. This groundbreaking transformation curbed red-tapism and enhanced transparency, resulting in faster progression of the projects. "Red-tapism will no longer be tolerated. Delayed decision-making results in losses. To eradicate red-tapism, the new software will specifically detect how much time one particular official has taken in disposing of any file," Gadkari explained last year.

On the other hand, NHAI has also switched to a new system to transfer the compensation for land acquisition to beneficiary accounts through the Public Finance Management System (PFMS) to fast-track the disbursement process. Faster compensation can be directly interpreted as easier land acquisition. Using sophisticated construction technologies like 3D AMG that helps double construction speed has also played an instrumental role in setting up infrastructure projects on a fast-lane.

An Innovative Axis to India-centric Problems
Even amidst the country's mint approach towards infrastructure development, let's not forget that we are still a third-world country making our way out. To continue this momentum, we need India-centric solutions to our desi challenges. The most effective waterway solutions in Paris that run through the city's heart can't be replicated in Mumbai. We need innovative solutions that fit the purpose, making a visionary, innovative approach all the more important. Lend your ears to Gadkari, who reminisces one of the situations he had to face after assuming the office, "You will be surprised to know that at the Haldia port in Kolkata, there was a channel on which we would spend Rs 250 crores every year. My OSD, who is an IIT engineer, suggested that opening another channel could save Rs 200 crore per year. When I asked the Chairman to do so, he said, "No sir, this is not possible." I told him to his face that he must be getting extra income from the Rs 250 crore spent every year. So, I summoned the Head of the Department from IIT Chennai and an Australian consultant. Both of them agreed that it was possible. You won't believe that now we are saving nearly Rs 200 crore every year. Now the same work is being carried out at Rs 50 crore."

The Road Ahead
It's a great omen that Gadkari sees Indian Institutes of Technology (IITs) as the goldmines of our country. Moving ahead, minister aims to build 2 lakh KMs of the National Highways network by 2025, including 7500-KM-long 22 new expressways worth 3.10 lakh crore. He recently clarified the road ahead, saying that the adoption of cutting-edge technology, innovations, and digitalization would lead to all-inclusive and sustainable development in the country. He said, "In the journey of Azadi ka Amrit Mahotsav, we are standing at a turning point where our Government is taking concrete steps towards building a tomorrow, which is far more vibrant, Aatmanirbhar, and climate-resilient than our today." He definitely is walking the talk.