Russia has never failed to demonstrate its potential to be considered as one of the greatest global leaders, though the country has also faced its share of ups and downs. Amidst the economic turbulence in Russia during the early 90s, when the country had embarked on the path of a market economy, Dmitry Peshnev Podolskiy (CEO, Home Credit Russia)chose the booming finance sector as his destiny rather than following his family tradition of becoming lawyers. With an unconventional career path at the beginning, Dmitry worked in the accounting methodology department, developed procedures for reporting and keeping records of operations with foreign currencies,precious metals and securities, as soon as he entered the second year of the institute. The pinnacle of this path is the position of COO in the BCS Financial Group the largest securities brokerage company in Russia, from where Dmitry was compelled to move from operating activities to business management. From heading the custody business of Alfa Bank(2001-2004), developing the strategy of the BCS financial group(2008-2009) heading the Private Banking division at Gazprom bank (2013 to 2017) to joining Home Credit Russia in 2020 Dmitry has felt the taste for business development and has emerged as an invincible leader.

Below is an excerpt of Dmitry's interview with CEO Insights.

We have doubled our share in
cash loans market from 1.5 percent to 2.8 percent, and we entered the top 10 banks in terms of the size of the credit card portfolio, which increased by 25.6 percent over the year. Successful in digitizing business, 80 percent of our 2.5 million active customersuse our mobile application every month, and 20 percent do it daily. 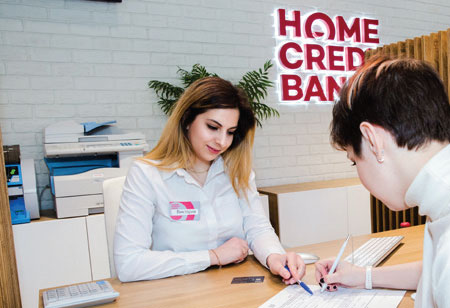 The share of transactions made through mobile payment systems in debit cards is 37.6 percent against 25.2 percent a year ago, in credit cards 31.1 percent against 15.4 percent a year ago. Our chatbot solves more than 57 percent of all calls independently, without involving any specialist in customer service. As a result of the implementation of the entire setof measures for business transformation in January September 2021, we were able to increase our net profit by 3.7 times compared to the corresponding period of 2020. It amounted to 6.72 billion rubles according to Russian accounting standards.

Our mission is not only to meet the already formed financial needs of our clients, but to help them achieve financial well-being

How do you align your day-to-today strategies with the company’s overall goals?
I do not separate myself and the company. And I do not separate personal and work time. I work 24x7, and I live in the future, always looking a few quarters ahead.Solving problems here and now is not a CEO's job.The CEO's job is to look ahead and see how the company's actions today affect its future progress. 3-4 quarters ahead is the closest time horizon that I would focus on in a normal business situation.My diverse experience and accounting practices allow me to be very native with all the finance topics, and the operations background provides me with insight into how to keep the organization perfectly organized and functioning like clockwork.

What were the challenges encountered by you during the
covid and how did you over come them?
We have a good start thanks to the techno logical advancement of our business. For example, at the beginning of November, another lockdown was announced in Moscow due to the worsening situation with Covid. But client activity hardly fell. After all, our clients are already accustomed to online services. They know that they can completely manage their finances in a mobile application without visiting the banks. We were the first among Russian banks to startpaying bonuses to vaccinated clients. Since the end of June, we have already held three campaigns in support of vaccination, attracting about 13,000 people.

Going forward, what are the market opportunities that you foresee as a leader and what are your plans for the future?
As the business will continue to go digital, augmented and virtual reality technologies can become the next global driver of big business changes. We have a speech analytics system that allows us to analyze 100 percent of conversations between call center operators and customers and thereby improve the quality of our services. And, of course, the development of technology is changing the landscape of the financial market as a whole. Global bidirectional traffic is in progress. Fintech grow larger and become banks. Banks, seeing how much investors are willing to value fintech, are trying to reclaim this technological space and become fintech. The future is that high tech banks will emerge that will combine advanced technology and banking expertise.

Dmitry Peshnev Podolskiy, CEO, Home Credit Russia
Graduated with honors from the Finance Academy under the Government of the Russian Federation, Dmitry has an MBA degree from the joint Executive MBA program by the London School Economics, the New York University Stern School of Business, and HEC Paris business school. He also studied the Stanford Executive Program at Stanford Graduate School of Business.

Hobbies: Collecting Soviet cinema posters and cartoons
Favourite Book: The Hobbit, or There and Back Again by J.R.R. Tolkien.