The Divine Flavors of Ancient Temples in India 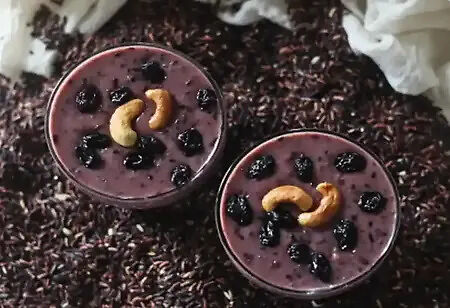 Ever felt the puliogare (tamarind rice) served in temples taste delightful, making you want to even try the dish? The same is true for various dishes such as idly, kheer, vegetarian meals and biryani as well. Typically, Indian temples have a long-standing tradition of feeding any who visit the temple. Naturally kitchens are built within the temples, with some having its presets to cook the food, while others have common people who can devote their time for the service. What makes temple food a specialty is connected to the ingredients, the making and the place. It’s why food has not only become a trademark for certain temples, but a marketing strategy that pools people across and beyond India to receive blessings and pray for welfare. It’s not easy to replicate the food offered from temples and that’s the magic that wields its aroma of attraction and increases devotion. Here are top famous foods of ancient temples in India.

The 56 Tastes of Jagannath Temple

Sitting at the coastal eastern Indian state of Odisha in the city of Puri, Jagannath temple feeds a crowd of over 25,000 devotees everyday and even more during festive seasons. Established in the 12th century, the temple offers 56 varieties of foods, comprising 40 different vegetables and lentils, six rice dishes, 10 traditional sweets such as peethas, payesh, rasagola and malpua. It has one of the largest kitchens in the world and feeds up to six times a day. Like most ancient temples, the food is cooked in ayurvedic style. It is slow-cooked in earthen pots stacked above each other in groups of nine. According to its legend, the aroma of the food is not released until it is offered to goddess Lakshmi, who is believed to be the one who cooks the food and not the human cooks. Called the mahaprasad, the temple receives plenty of donations, mostly in the form of food grains from the villages around it. Also, farmers are said to specifically grow crops for the temple. The cooks take the prepared food for sanction and is then distributed through kiosks to devotees at a modest price. The used earthen pots are discarded and a fresh set is brought each morning for a fresh heavenly start.

Located in the famous silk city, Kanchipuram, this idli is served at the Varadaraja Perumal temple. Not only are the idlis tall in cylindrical shape, but taste different from the regular idly as they are quite spicy. It is said that the idly gets its especially from being steamed in the Mandharai leaves. Along with the usual ingredients, others include methi (dried fenugreek leaves), pepper, jeera (cumin seeds), dry ginger, asafoetida, curry leaves and salt are added for a health-packed crunch. The batter is ground coarsely. Once the batter is ready, kudalai (bamboo-leaves based cylindrical baskets) are used as moulds. Banana leaves are placed inside the basket to prevent leakage and the Mandharai leaves are rolled and fixed into the basket to hold the batter. They also emit a mild yet distinct aroma that blends in with the ghee (clarified butter) and spices, adding to the unique taste.Since the idli is prepared for the masses, it takes around an hour and a half or three to four hours to steam these idlis.

According to its legend, the idlis are served as an offering to the deity since the reign of the Pallavas. Till this date, many restaurants, in dismay, have tried their hand at replicating this idly. However, it is said that the best ones are found at the madappalli (temple kitchen) of Varadaraja Perumal Temple in Kanchipuram.

Volunteer for a Dining Fiesta at the Golden Temple of Amritsar

The Golden Temple of Amritsar is a must-visit place not only for Indians but for every willing soul across the globe. Gurudwaras normally serve free langar, however, the langar served at the Golden temple is a special one. It has one of the largest kitchens in the world, with families, friends and strangers getting together for a fabulous meal preparation. It is not just a meal, it basks in the positive intentions of its chefs and of course, into the spirituality and divinity of the temple. Anyone is welcomed to dine here, irrespective of their caste, religion, race, social and economic status etc. the Golden temple has two kitchens, 11 tawas (cooking pans), seaving and dough kneading machines, burners, mechanised oven and conveyor belt to churn 11,000 rotis an hour, among other equipment. Usually the dishes are prepared by the hands of the volunteers, but during special occasions the roti making machine is used. The quantity of ingredients used at the temple are around 1500 kg of rice, 13000 kg of lentils, 12000 kg of flour and 2000 kg of vegetables everyday. In this langar meal rice, dhal, roti, sabzi, channa, kheer and sheera are served. During Baisakhi hot and crispy jalebi are served. The Kada prasad is also offered and devotees believe that eating the prasad served at the Golden temple will rejuvenate the body and cure many ailments. Selfless service, dedication and a happy heart combined together with the ingredients are the essence that unleash a divine dining experience.

A Deliciously Sweet Welcome to the Goddess at Attukal Temple

The Attukal Pongala held at the Attukal Temple, Thiruvananthapuram, is the largest gathering of lakhs of women for a festival. Pongala (to boil over) is chanted during the preparation of sweet payasam, a rice-based pudding made from jaggery (India’s natural sugar), coconut, plantains and of course rice. The ingredients are cooked in earthen or brass pots placed atop firewoods and the pongal are offered to the goddess or Bhaghavaty. Legend has it that the Tamil epic, Silapathikaram’s calm yet courageous heroine, Kannagi, after setting aflame Madurai in her rage, reached this spot and prayed to cool her anger. After hearing Kannagi’s pious tale, the women invoke the goddess to step foot on their land with the scent of the sweet pongal. The ritual is performed only by women and the streets are packed with devotees during this time. This ritual is said to appease the goddess who is fondly called as Attukalamma.

Offered to Lord Krishna at the Sri Govindajee Temple in Imphal, Manipur, this is again a sweet delicacy made from black rice that turns purple when cooked. According to its legend, the 19th century king Maharaja Nara Singh is the one who commenced offering Chak-Hao-Kheer at this temple. Called Chak-hao, the indigenous black rice is cultivated in the plains and hills of Manipur and Nagaland. The black rice is cooked in milk, sweetened with jaggery or sugar and is garnished with cardamom. The temple priests slow cook this prasadam and the result is a purple kheer both delicious and nutritious. The outer bran layer of this rice is almost black, emitting a distinctive fragrance and taste. The Chak-hao comes in two varieties, Chak-hao Poireiton and Chak-hao Ambui and are largely cooked during community feasts and ceremonial purposes. Due to its rich source of Vitamin B, Vitamin E, iron, calcium, manganese, zinc and polyphenol, it is used by traditional medical practitioners that promises several healing and nutritional purposes. In fact, the outlier, bran hull, is said to contain the highest level of anthocyanins. It also has anticarcinogenic properties and the bran is believed to soothe inflammation caused due to allergies, asthma and other diseases.

Break for Biryani at the Muniyandisamy Temple

Preparing and offering food, from sacrificed animals and birds, to god and people is a common traditional practice in certain religions. One such tradition is followed in Tamil Nadu to Muniyandisamy or Munieshwaran, a towering fierce looking deity with protruding eyes, bushy moustache, and holds a long blade in his hand. According to folklore, this protective deity called Munis can be found at the entrance of most villages in Tamil Nadu and take the form of bhoot ganas or are part of Lord Shiva’s army. They are believed to be half-human and half-otherworldly. The locals mark his honour by praying to this guardian deity and offer him freshly harvested fruits, vegetables and sacrifice livestock. During the harvest festival, people of the Vadakkampatti village in Madurai offer their famous biryani as prasad to the deity of the Muniyandisamy Temple. Thousands of kilos of rice, sacrificial chickens, goats and vegetables go into the making of this biryani, which is cooked on huge cauldrons placed on firewood stoves and the localities are the chefs of this grand preparation. When dawn breaks and the prayers are done, the biryani is served as breakfast to the locals.

Demand and Commercial Scope of Plant Nursery Business in India