How Indian Manufacturers are Giving Stiff Competition to Foreign Brands? 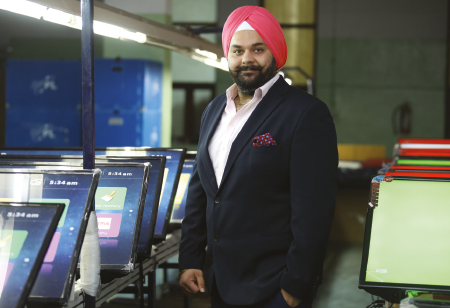 There has been a big revolution in the television manufacturing industry. Many brands have launched TVs in India, but only a few have succeeded, as nobody has invested in infrastructure. They are just doing trade in India. India is a vast country and the infrastructure cannot be ready in just one or two years, as it has a completely different environment.

Currently, there is degrowth of 5-7 percent in the offline market, due to which the market has not grown this year. The prime reason being the slowdown in technology, which affected the consumer market, including automobiles. There are various other reasons for the slow down. The current market size of TV is 12-13 million sets and basis the understanding is, this year, it will remain close to the given figure.

Apart from one foreign player that came into the market last year, there wasn't anyone else to threaten the market. Many other licensed brands came into the picture, but were not successful in giving competition to other existing brands. This year, there are more than 20 brands, mainly mobile brands that are coming-up with their TVs. One should not confuse that smart TVs are like smartphones. The market size for television is 12 million sets, and 350-400 million for smartphones. There is a huge gap and the quantities are very less. The major challenge for after-sale service is - it's a door-to-door service which took all the major brands around 10-15 years to establish them.


As mentioned earlier about how vast the country is and how different it is when it comes to being compared to countries like China and Korea, they are very different in terms of language, whereas India is a diversified country, where every 200kms things change rapidly. So, when it comes to the door-to-door service, it will take a lot of time for any brand to establish themselves and one should be ready to burn their pockets in the first five years

The top-3 television brands in India have a market share of more than 20 percent, which might reduce in the next five years and market share of these brands will increase. With this, the customers will be able to get the best quality with the best of specs with affordable pricing. The best part of the competition is the price gets open. For a decade, the Indian consumers were paying 100 percent for conversion screen, which is a lot of money to spend with completion of the sale it should increase, and the economy should pick-up because sales and the economy move hand-in-hand.

As mentioned earlier, infrastructure is the key for an Indian manufacturer. Only running social campaigns and spending a lot of money doesn't sell your product; word-of-mouth also plays a key role. If we don't have good infrastructure, then customer satisfaction decreases (which is the most important part). Only reducing the price or giving discounts doesn't help, rather it kills the market. There are brands that have never introduced TVs in their own country, but are introducing their TVs in India. There will be a spike in three-four months max and a year after that, the market will settle. As mentioned earlier, there have been more than 10 dozen multinational brands that launched their televisions in the country, but failed to establish themselves. By next year, there will be a lot of brand equity that will be introduced, as a lot of brands will filter-out of it because as mentioned, the TV market is only 12 million sets. By the next five years, it will grow to 15-16 million sets. The technology provided by the top-3 brands or the up-coming brands is the same and the customers now have started understanding why to pay more when they can get the same at an affordable price.

The New-Age KYC Technology for the Post-Pandemic World