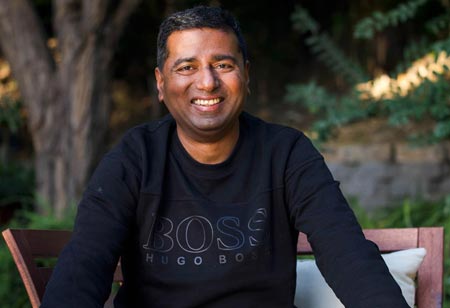 Rahul Narvekar, CEO & Founder, India Network and India Angel Fund, the man behind several successful entrepreneurial ventures, is on a mission to create a million entrepreneurs in the next three years.

A first-generation entrepreneur, Rahul grew up in a chawl in Mumbai and his parents struggled to even pay for his school fees. He was almost asked to leave college due to non-payment of fees. He understood the need to pool in resources and did all sorts of jobs from that of a delivery boy to a hospital ward boy to fund his education.

After graduating from Mumbai University, Rahul enrolled in Burhani Institute of Business Entrepreneurship but was thrown out for asking too many questions and was rated as "most unlikely to be an entrepreneur"!

In the course of his journey as an entrepreneur, Rahul did a multitude of things including setting up the first music channel in Asia -Channel Oxygen, writing the screenplay for Trikal serial, to name a few.

He joined the Ansals after he moved to Delhi after his marriage. He performed exceedingly well and quickly rose up the ranks. However, due to his wife's illness, he put his career aspirations on hold to tend to her. After things stabilised on the personal front, he co-founded fashionandyou.com at a time when online shopping was unheard of. He, then launched indianroots.com with NDTV which went on to be valued at USD 85 million!

The Harder You Work, The Luckier You Get!
After exiting Indian Roots, Rahul did some self-introspection and wanted to rewire his life plans. He went around travelling through small Indian towns where he was blown away by the sheer talent that resided there. He says “The brightest minds of Bharat live in the smaller towns & cities. I decided to help these youngsters who had immense potential but no exposure and limited finds. I set up the India Network (IN) for budding entrepreneurs from these smaller towns & cities". With IN, Rahul accelerated the conversations between mentors, investors and budding entrepreneurs on how to turn big ideas into thriving startups. Mentors at IN are serial entrepreneurs like Sanjeev Mohanty CEO Levi's India, Vishal Gondal of Goqii, Pranay Chulet of Quikr and many more.

The Struggle You Are In Today, Is Developing The Strength You Need For Tomorrow
It wasn't an easy road as Rahul navigated through various colleges. The paradox is that today he is invited to Institutions to speak on multiple aspects of life, challenges and opportunities to inspire individuals to tread the untrodden path. Yet, at one time, he was asked to leave college because he could not afford to pay the fees. But that did not deter him. He believed that each of these struggles reinforced his belief that he was made for bigger things in life. Having graduated from Mumbai University, Rahul managed to enrol himself in a business entrepreneurship course from Burhani institute of Business Entrepreneurship. This turned out to be the Mecca of Entrepreneurship as he witnessed Ronnie Screwvala, who became his first inspiration. However, college fees were again a question mark! But Rahul had made up his mind, and so, he simultaneously started working with a Teleshopping Network, as a customer care officer in the evening to fund his education.

The Future Belongs To The Curious!
Rahul always had ‘why and how’ in his mind. And he learnt early on in life that if you wanted something, you had to ask for it. But this did not go down well with people around him, and he was unfortunately asked to leave the entrepreneurship school as he ‘did not have it in him to be an entrepreneur’. Every now and then the entrepreneurial spirit in him would emerge, and he would do unique things like setting up the first music channel (Oxygen), writing the screenplay for Trikal serial and so forth. He had still not tasted success, but he knew in his mind that the only thing that separated successful entrepreneurs from unsuccessful ones was pure perseverance!

While managing the district center, Rahul tasted unprecedented success through absolute focus and hard work. An IIM-C alumnus, his career witnessed a fast forward mode till he hit the pause button as his spouse was diagnosed with a life-threatening disease. Having combatted the odds together, Rahul navigated his life back on track. He co-founded fashionandyou.com at a time when online shopping was unheard of. But this wasn't the end of it as Rahul went ahead and launched indianroots.com along with NDTV which boasted of over 100 Indian designers' clothing's available to the consumers ‘at the click of a button’.

Work Hard In Silence, Let Success Be The Noise
As per the India Venture Capital Report 2020, there were three distinct phases of the Indian VC Industry. First, from 2011 to 2015, the industry witnessed rapid activity growth to support an evolving startup environment. Second, as the euphoria subsided, 2015-2017 witnessed cautious behaviour and finally, the last two years have seen stabilizing of the industry with crucial marquee exits.

Rahul launched The Startup Studio - an incubator and an accelerator, to not only connect startups with mentors but also help with funding, give them strategic direction and global exposure. He says "Most startups chase
funding, forgetting that mentorship is as important. Some startups with the biggest fundings have collapsed due to lack of direction. We focus on all the three Ms - money, mentorship and access to markets. We want to give small cheques to many people and help them drive their dreams to reality".

Imagine the future of approximately 80,000 startups in India, out of which about only eight percent are funded. Extremely passionate about entrepreneurship, Rahul's idea was not just to provide a unique ideation and funding window but more importantly provide them global exposure. One also needs to keep in perspective that contrary to popular belief, VC funding plays a minor role in funding basic innovation. Venture capitalists invested more than $10 billion in 1997, but only six percent, or $600 million, went to startups. Therefore, his involvement and engagement in each journey to ensure their success was the key differentiator.

Dream. Believe. Achieve
Everyone calls Rahul the North Star of Entrepreneurship. One would imagine why? Well, the North Star is the anchor of the northern sky and helps those who follow it to determine direction while navigating them towards a purposeful destination. Symbolically, the North Star is perceived as a beacon of inspiration and hope to many. Rahul is that and much more to a lot of budding entrepreneurs. He firmly believes that we all have an internal compass that helps us navigate us towards our dream. Today while his dream is to create 1 million entrepreneurs in the next three years, he says that his sense of achievement will be when he is successfully able to coax, cajole and guide these bright minds towards their individual milestone.

Rahul was empathetic towards people who ‘wanted to make it big with honest dreams’. He created a unique platform, India network (in), for budding entrepreneurs from tier ii and below cities to connect, collaborate, deliberate and co-create ‘unique ideas into reality’

When you try and tell him that this does seem like an impossible dream, you are taken aback by his effervescent smile and undying optimism. Having experienced so much difficulty at every stage, be it hand to mouth living during childhood or spouse diagnosed and hospitalized, Rahul's spirit never dampened. In fact, any success that came Rahul's way was like the cherry on top as he never felt dissuaded or discouraged. For him, optimism was not a mindset; it was and is a behavior.

Rahul was empathetic towards people who ‘wanted to make it big with honest dreams’. He created a unique platform, India network (in), for budding entrepreneurs from tier ii and below cities to connect, collaborate, deliberate and co-create ‘unique ideas into reality’

In Life, It's Not Where You Go, It’s Who You Travel With!
The clarity of thought that Rahul has is impeccable. Imagine what it can do for the people who are on the journey with him – all those bright minds wanting to make it just like their aspirational Leader did several years back – Creating a successful enterprise and significant value.

What Rahul is doing is much more than that. He is helping people align with their Purpose, identifying ways to create shared value, give back to the ecosystem but more importantly celebrate shared success. With connected interests and defined business relationships, he is creating transformational opportunities. These words seem easy, but the road doesn't, as he is conscious and realistic in his approach. He knows that there will be unprecedented times where he will have to help individuals maneuver their strategy by effectively responding to trends, focusing on opportunities and more importantly, building trust.

A real Indian at heart and truly humble in his approach, Rahul's undying need to succeed and achieve is unshakeable. And it’s no surprise that individuals come out of the auditorium, absolutely charged and wanting to live their dreams. And as he ends another inspirational talk on entrepreneurship at one of the Ivy League Institutes, his words resonate with the audience, ‘Every individual has a destiny to reach, a vision to fulfil and a purpose to achieve. I am only the enabler of that journey’.

Rahul, who plays many roles efficiently- that of a dutiful son, a supportive husband, an inspiring father, but more importantly, an individual who has a dream to create one million entrepreneurs in three years, cheers to that and more!