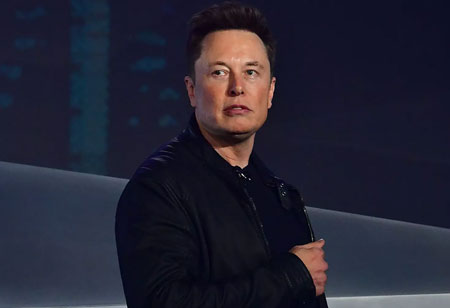 Tesla's CEO Elon Musk was named Time magazine’s ‘Person of the Year' for 2021.This year his electric car company become the most valuable carmaker in the world and his rocket company soar to the edge of space with an all civilian crew.

“Person of the Year is a marker of influence, and few individuals have had more influence than Musk on life on Earth, and potentially life off Earth too. In 2021, Musk emerged not just as the world's richest person but also as perhaps the richest example of a massive shift in our society” Felsenthal said.

He described the shift in how rich entrepreneurs and

their priorities are shaping the lives of many, amid a economic crisis that was exacerbated during the pandemic. Yet he said Musk stands out from that group.

Elon's startup rocket company, SpaceX, has leap frogged Boeing and others to own America's space faring future. His car company, Tesla, controls two thirds of the multibillion dollar electric vehicle market it pioneered and is valued at a cool $1 trillion. This made Elon, with a net worth of more than $250 billion, the richest private citizen in history. He is also a player in robots and solar, cryptocurrency and climate, brain computer and underground tunnels to move people and freight at great speeds on dominates Wall Street.

This year, Elon became the first person ever to be worth more than $300 billion. The 50-year old continued to attract fans (and investors) with his ambitions. SpaceX launched an all civilian, non astronaut crew to space in September opening the doors for more 'everyday people' to do the same.

“We don't yet know how fully Tesla, SpaceX and the ventures Elon has yet to think up will change our lives. At 50, he has plenty of time to write the future, his own and ours. Like it or not, we are now in Musk's world” Felsenthal said.