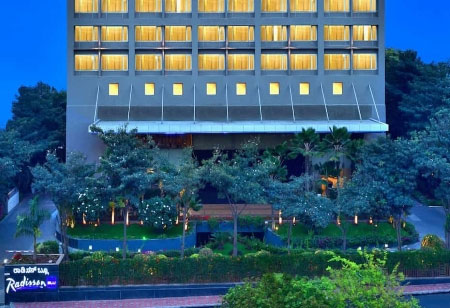 American multinational hospitality company Radisson Hotel Group has launched its new midscale brand, Park Inn & Suites by Radisson, exclusively for India in a master-franchise partnership with Treebo Hotels parent Ruptub Solutions. With this new brand, the group is looking to double its Indian footprint to nearly 150 hotels and resorts to be added by 2025. Treebo has nearly 1,000 properties in 120 cities and is backed by investors like Matrix Partners India, Elevation Capital, and Ward Ferry Management, among others. The company said Park Inn & Suites by Radisson will initially focus on Kerala and Karnataka as well as the northeast.

The new hotels will have a typical room inventory of between 50 and 70 and will have open social spaces, a welcome corner, among its other regular offerings like a fitness center and WiFi. The partnership will identify and convert opportunities and develop a 150-hotel-strong network of Park Inn & Suites by Radisson properties over 10 years including franchised hotels. Ramzy Fenianos, chief development officer, Asia Pacific, at Radisson, said, “Covid was a slow time for the industry and during that time we looked at how we could grow. We looked at India which is one of our largest strategic markets. This is part of our five year plan in India and the country is an incubator for this brand. The brand will offer midscale hotels in India an opportunity to enhance their visibility”.

In a statement, Sidharth Gupta, founder and director of Ruptub Solutions said, “We have been incubating this brand for the last year and a half. This capitalises on a space in the market between premium economy and economy segments and very few brands operate in this
space. We collectively aim to leverage the group’s hospitality expertise combined with our technology offerings. The coming years will prove to be the game-changer for India’s hospitality industry”. In India, Radisson Hotel Group company operates brands such as Park Inn, Radisson Blu, Country Inn & Suites as well as its flagship upscale brand Radisson. It is the third largest hotel service provider in India, according to hospitality consultancy Hotelivate, after American chain Marriott Hotels and Indian Hotel Company Limited. In 2018, its parent, Carlson Rezidor rebranded itself as Radisson Hotel Group.

Radisson said the brand will fuel its next phase of growth in tier 2, 3, 4 and 5 markets like Shillong, Itanagar, Kohima, Gorakhpur, Dimapur, Moradabad, Etawah, among others. It expects nearly 50percent of the future hotel conversions to come from such cities. It said it has about 110 operational hotels and about 40 under development across 60 locations. At present, it has about 50 percent of its portfolio in tier- 2 and 3 markets. Zubin Saxena, managing director and vice president operations, South Asia of the group added, “These hotels are customised for mixed use developments which subsidizes the construction cost for a developer and also 50-70 rooms is the right size for these cities.

We have dedicated all our efforts toward developing an indigenous brand architecture that will unlock economies of scale. This partnership is a critical step toward our brand building journey and meeting the growing demand of the discerning Indian traveler for highquality accommodation."Hotelivate’s Trends and Opportunities report 2022 said it is the third largest brand in terms of the number of cities in which it operates and is present in 63 locations in India. It is the only international hotel operator to be present in as many cities preceded only by Indian Hotels owned Taj Hotels which is present in 77 cities as well as ITC Hotels which is present in 71.
Read More:

Akul Juneja to be Appointed as Managing Director, Senior Advisor by Julius Baer