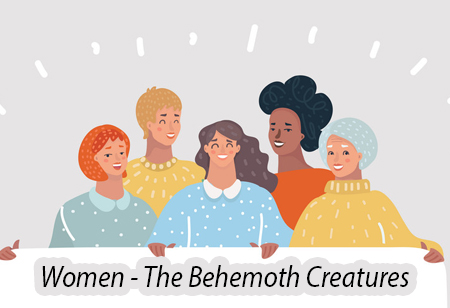 There is something about a woman, the only inimitable creation of God who beholds supernatural potential. Whether it be the past or present, women are to be revered with great respect as their status has been subject to many changes over the span. From being the supervisors of household chores, they have affirmed their competency by adding to the economy of the country. Today, the number of women in senior leadership has grown, particularly in the C-suite, where the representation of women has scaled from 17 percent to 21 percent. However the figure still stands at 6.4 percent, their achievements are remarkable. Bringing about a great expansion and turbulence in the industrialized world, women have become entrepreneurs, foodpreneurs, fashionistas, medical drivers, technologists and much more. Through Man Ki Baat, the Prime Minister of India Narendra Modi has even acknowledged many amidst the revolutionaries like the first female Merchant Navy captain Radhika Menon, the first women bus driver Vasanthakumari, and several other such 'first ladies' who were rewarded by the President of India Ram Nath Kovind. There’s many more such firsts like, Mithali Raj is the first female cricket player to play 200 ODIs, Matunga railway station in Mumbai is the first station in India run by an all women staff, and it was the first time this 70th Republic Day parade that the biking stunts were performed by all women bikers contingent of the Border Security Force.

India is a country where women are worshipped as goddesses, and yes they have got clout. However, there’s an overlooked aspect to this. Even after women have roared their accomplishments, and gender parity talk is promoted all over in the current era, still women continue to be underrepresented at every level. Also, in our society, people don’t worship women as goddesses, but moreover the attributes performed by them as mother, wife, daughter-in-law, sister, and many others.

The culture of work at offices should be alike for all irreverent of gender disparity. But, where all employees should feel respected and have an equal opportunity to grow and advance, young women are differentiated be it for roles & responsibilities, salary, efficiency, trust and others. Venture Capitalists and Investors have stereotypical images of women and are often hesitant about their credibility, trust worthiness, experience and knowledge. A December 2018 Morgan Stanley Survey concludes that business pitches presented by women entrepreneurs are often confirmed on a compromise basis comparative of men. Where men put a 50 percent of their efforts in accomplishment of a task women devote their 150 percent despite their family responsibilities alongside. By fostering diversity, promoting a culture of opportunity and fairness, and drawing their attention towards success, companies can devoid their gender gaps and make progress on the road to equality.

However, there has been a change in the perspective and a lot more is to happen. Women are being lauded, child marriage and dowry system is getting abolished. Parents, in-laws and husbands at home are sharing a hand in the households now, propelling them to rank their endeavours.

Womanhood is behemoth, it is to be admired for a woman’s super achievement. Though, Women’s Day is celebrated on 8th March, but it is something that should be celebrated everyday, fuelled as such that it empowers them to soar the sky heights and never stop. We at CEO Insights do this everyday. We are proud that we recognize sheroes from various industries such as FMCG, Education, Fashion, Healthcare, Marketing, Technology, Retail and young women entrepreneurs as well. Raising a toast to the present and emerging classy, sassy, and fabulous sheroes, we are looking ahead to appreciate more of their productive capabilities.
Read More:

5 Women Who Broke the Glass Ceiling