You should go where your calling is and do whatever it takes to make it work. For Gulab Patil (CEO, Lemma Technologies), his calling was the world of programmatic DOOH. Who knew that an MCA from North Maharashtra University who started his career as a software engineer in 2012 will incept one of the first pDOOH companies of India and will steer forward the industry to a whole new direction! Today, under his leadership, Lemma is bringing in the next wave of change not only in the OOH segment but also in the digital ad industry.

Despite being his first venture, he is running the show like a pro designing some of the most influential campaigns. The company has already been a winner at Code studio Indian Technology awards and conference 2019 as Best Technology Provider for programmatic advertising services. Gulab speaks to CEO Insights to throw light on his journey, the company and the challenges.

From a software professional to an advertising maverick, tell us about this shift in your professional journey.
It was with PubMatic that my journey in programmatic & digital technology truly began. I started as a team lead in 2012, but bid adieu to PubMatic as Director of Engineering in 2017. Over these five years, I worked on several projects at the company. The most exciting one was the conceptualization & development of an ad serving platform which is now a significant revenue generator for PubMatic.

Lemma Technologies is my first entrepreneurial venture, and I take pride to say that it’s bootstrapped. I have been successful in growing this business right from the scratch. pDOOH was an alien concept in
India till Lemma made debut with its first campaign in January, 2019, which was also the very first pDOOH campaign in India.

What inspired you to take-up entrepreneurship? Could you highlight on some of the challenges that you brushed and which helped you be who you are today?
From a very young age I was always interested in innovation and any opportunity that encouraged new ideas. I always yearned to do more and achieve greater success, both academically and professionally. I made this dream a reality with the establishment of Lemma.

From a very young age, I was always interested in innovation and any opportunity that encouraged new ideas


Most businesses are designed as a solution to an existing problem or an opportunity because of an emerging trend. I identified both an opportunity in the form of growing infrastructure through Digital India and Smart City mission and served as a solution to the lack of a standardized process in the space of DOOH. pDOOH is quite at its nascent stage in India, but I realized that even at the global level, where the concept is far more mature it still continues to be an unorganized and unstandardized segment with no connectivity to the standard digital ecosystem.

Lemma was conceived to bridge this gap in the DOOH industry with a cloud-based programmatic ad exchange technology, at the onset of DOOH in India, fostered by the booming infrastructure through smart cities initiative. However, being the first in any field has its own set of challenges. The case was no different for us! The major challenge was that DOOH was being too fragmented, with no common hardware and operating systems to connect this media to a programmatic ecosystem. This is where I took it on myself to develop products that not only converted any smart screen to a programmatic display unit but also made them capable of rendering ads through integration with our cloud base AdTech platform.
Family is always the backbone of an entrepreneur’s success, especially during the initial years when the entrepreneur finds it difficult to balance between the two. How do you go about it?
Innovation is my passion and I spend most of my time with this only. Passion at work imbalances personal and professional life. But I have some dedicated time slots for family and personal interest. I manage this by creating schedules and try to follow it always keeping my family informed about work schedule and changes if any, and prioritize tasks based on importance not on urgency.

Are you engaged in mentoring?
Not mentoring, but I do sponsor the education of underprivileged children from small towns of Maharashtra and other villages in India, ensuring they have better future in their growing years.

Entrepreneurs are always pressed with time. How do you manage updating and upgrading yourself constantly?
True! Hence I use social media as a
powerful tool to keep track of the industry updates. Apart from this healthy discussion with my business partners have from the beginning helped Lemma stay ahead of the game, as each one of them have over 13+ years of rich experience within the digital industry before on-boarding as partners with Lemma. We also rely on data gathered through our proprietary analytics tool which gives us insights into audience behaviour and other relevant data gathered throughout IoT Beacons, Latlong data and third party tools.

Key Management:
Gulab Patil, Founder & CEO, Lemma Technologies
Affiliated with digital media and technology industry for 12 years, Gulab is credited with changing the dynamics of OOH in India by introducing the concept of pDOOH. He has done his primary education from Zilla Parishad School, BSc from SSVPS College, and MCA from North Maharashtra University. 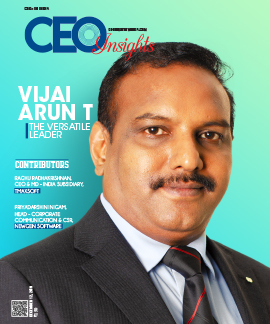