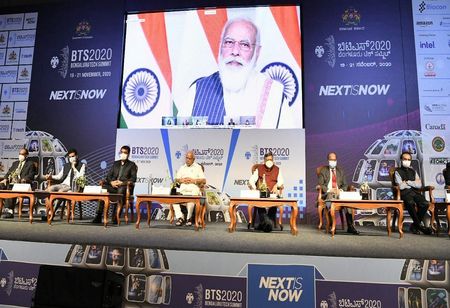 The Bengaluru Tech summit (BTS) is a flagship event first launched in the year 1998. This was organized by the Department of Electronics, IT, BT, and S&T of the Government of Karnataka, the BTS over the years and has energized the technological sphere in India and has positioned the city of Bengaluru as one of the most dynamic cities in the world. However, in the past two decades, the summit has seen some of the world's most brilliant minds showcasing their visions, business leaders forecasting the future, technocrats unraveling new products, and also startups presenting cutting edge innovations.

The latest 23rd edition of BTS 2020, which started this week on Thursday, November 19, was a special occasion for many different reasons. This year's edition of the Bengaluru Tech Summit 2020 was conducted as a hybrid event in the city of Bangalore. The event was virtually inaugurated by our Hon'ble Prime Minister, Narendra Modi. Along with the PM Narendra Modi, the event was also graced by some of the most influential world leaders, which include Mr. Scott Morrison– Hon'ble Prime Minister of Australia, HE Mr. Guy Parmelin, Vice President of Swiss Confederation, and Shri Ravi Shankar Prasad- Union Minister for Communications, Electronics and Information Technology, and Law & Justice. The ceremony was presided by Shri BS. Yediyurappa- Chief Minister of Karnataka along with Dr. C.N. Ashwath Narayan –Deputy Chief Minister of Karnataka and Minister for IT, BT, and Shri Jagadish Shettar- Minister of Large and Medium Scale Industries and Public Enterprises, Karnataka.

The theme – "Next is Now"
This year's BTS is heavily focused on highlighting the role of technology and innovation in a dynamically evolving business world while keeping the Covid-19 Pandemic in mind. "Our governance model is tech-first," said PM Narendra Modi in the summit's inauguration speech. The PM further said, "During the COVID-19 pandemic and lockdown, the resilience of the tech sector came into effect. Solutions were deployed to enable work from home and work from anywhere. Technology helped to bring people together during the crisis. The pandemic was thus a bend in the road, and not the end,"

"The amount of tech adoption that happened in the last few months may not have happened in a decade. We are now in the middle of the information era, where change is disruptive," PM Modi further added.

Over 200 Indian Companies Participation was Observed
The summit witnessed more than 200 Indian companies setting up virtual exhibitions this year. Above 4000 delegates, 270 speakers, and more than 75-panel discussions covered a participant count of 5,000 plus, states an official statement.
In the summit PM, Narendra Modi reiterated the fact that the first-mover advantage does not matter anymore, as much as the best mover advantage. The PM said, "Anyone can build a tech product to disrupt existing equations in the market. India is now uniquely positioned to leap ahead in the information era. It's time for tech solutions designed in India to be deployed for the world,"

Additional Highlights of Day 1
The first day of the event also witnessed a keynote addressed by Mr. Anand Mahindra, Chairman, Mahindra Group, which focused on the need to strategize on emerging technologies. This year's BTS is also set to lay down greater emphasis on Drones & Robotics as an emerging solution in the Healthcare sector, The role of AI in Human Health, and Tech's role in Green Recovery and a Sustainable Future.