Sulfur Shortage is Both a Food Security, Green Tech Crisis 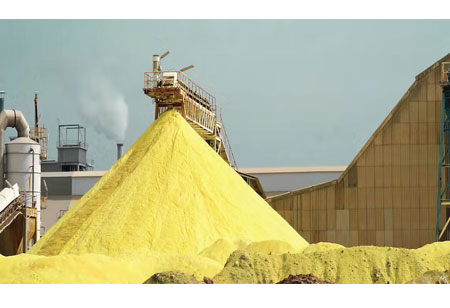 A massive storm is slowly brewing in the business world that could tumult operations and practices towards promoting renewable energy and eventually slow down the target of reducing greenhouse gases. We are talking about a global Sulfur shortage! From China's coal and paper shortage, the US's toys and toilet paper, India's cars and semiconductors, Brazil's coffee and water, Nigeria's cooking gas, to Lebanon's water and medicines, the declining Sulfur supply is causing significant disruption. The world has to brace itself, for it is about to ruin every sustainable and environmentally conscious plan that countries have planned and working towards.

Moving Away from Fossil Fuel to a Less
University College London(UCL)researchers warn that the demand for Sulfur is anticipated to increase from 246 to 400 million metric tons by 2040. At the same time, as the world's economy transitions away from fossil fuels, there will be less Sulfur accessible. More than 80 percent of the Sulfur used in the world comes from natural gas and crude oil. Fuel firms extract Sulfur for safety reasons and then resell it cheaply.

They claimed that by 2040, the annual demand for Sulfuric acid could increase from over 246 million tons to over 400 million, leaving between 100 and 320 million tons unmet.

Currently, only a minor portion of Sulfur is collected by miners the majority is derived from fossil fuels. While increasing the chemical's direct mining capacitycould partially close the anticipated supply gap, researchers argue that this is not a practical solution.

Ruining Natural Habitats in Mining Devil's Gold
The researchers contend that it would significantly harm the natural habitats where Sulfur is abundant. Sulfur mining has significant humanitarian costs in addition to environmental ones. Due to how risky it is, this back-breaking labor is done in some regions of China and Indonesia, known as `Devil's gold.'

For instance, to reach the crater where they mine huge chunks of yellow chemical, workers at the active Ijen volcano in Java climb thousands of meters each day. They often earn a few bucks each day after manually removing kilograms of Sulfur from the volcano. The miners' risky labor exposes them to toxic fumes all day long.However,improved extraction techniques and regulations might support sulfur supply before the anticipated fall.

It is critical to research to create lowcost, low environmental impact techniques for extracting significant amounts of elemental Sulfur from the numerous sulfate mineral deposits in the Earth's crust.

To lessen the effects of the shift and to stop cheap unethical production from influencing the market, the international community should think about promoting and regulating sulfur mining.
The researchers worry that this transformation, what ever its cause, would also result in a shortage of agricultural sulfur supplies.

The Sooner the Action, Lesser the Damage
Dr. Simon Day, a co-author of the study, stated that the issue is the diminishing supply, which could result in a period of transition when green technology outbids the fertilizer industry for the scarcer, more expensive sulfur supply, creating a problem with food production especially in developing countries. The possible hazards, however, might be avoided by taking action now to prepare for a sulfur shortage.

Scientists assert that this impending disaster is avoidable with the correct legislation, recycling pro-grams, and supply lines.

Recycling Lithium Batteries
Nearly all electric cars, laptops, and smartphones use lithium-ion batteries, which are also crucial for storing renewable energy in the face of the climate emergency. However, the present mining operations throughout the world are unable to produce enough lithium and other essential minerals to satisfy the rapidly increasing demand for these batteries. It takes time and money to establish new mines.

Additionally, mining brings about a number of environmental issues that have sparked protests against new mines, such as the depletion of regional water supplies and the pollution of the neighboring area by runoff debris.

All of this indicates that recycling old batteries is essential for changing the global energy grid in a sustainable way. However, commercial adoption of lithium-ion battery recycling is still relatively new. Battery producers have been hesitant due to worries that recycled products would be of worse quality than those made from freshly mined minerals, which could result in a battery's life being cut short or its internal components being harmed. Serious consequences may result, especially in an application like an electric vehicle.

Cobalt, nickel, copper, and aluminum make up lithium-ion batteries. These metals can all be recycled and used again. Yet the cost of recycling lithium-ion batteries is justified by the availability of these other metals. In actuality, recycling cobalt is less expensive than mining it. Lithium, however, is the opposite. Lithium recycling is more expensive than using newly produced lithium.

Since the process of recycling batteries is still in the early stages, the U has suggested an enhancement to the Defense Production Act by putting money towards securing the metals required for a clean energy transition while also researching and investing in recycling lithium-ion batteries.

Ex-CEA K. Subramanian to be India's Executive Director at IMF

Kiran, a Former Gold Medalist in the Javelin, is Chosen for the India Women's Tour of England