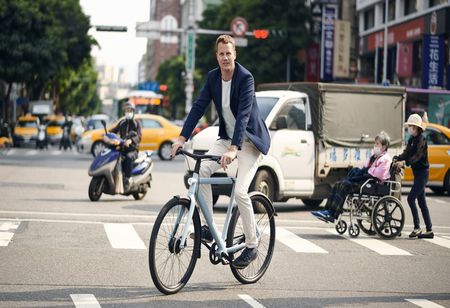 Amsterdam-based startup VanMoof has secured a $128 mn Series C funding round. The company designs and sells electric bikes that are quite famous in some markets. It now plans to evolve as the world’s leading e-bike brand by iterating at a faster pace.

Today’s Series C represents a big jump compared to the company’s Series B. Last year, VanMoof raised a $40 million Series B. Overall, if you add it all up, the startup has raised $182 million in total. The VanMoof X3 features a smaller frame and smaller wheels.

What makes VanMoof different from your average e-bike manufacturer is that the company intends to control everything from the supply chain to the customer experience. VanMoof e-bikes are premium e-bikes that are mainly designed for city rides. The most recent models currently cost $2,298 or €2,198.

They feature an electric motor paired with an electronic gear shifting system. It comes with four gears and you don’t have to change gears. All the rider has to do is jump on the bike and start pedalling.

Recognizable by their iconic triangular-shaped futuristic-looking frames, the S3 and X3 also come with hydraulic brakes, integrated lights and some smart features. There’s an integrated motion detector combined with an alarm, a GPS chip and cellular connectivity.

If you declare your bike as stolen, the GPS and cellular chips go live and you can track your bike in the VanMoof app. The company’s bikes are now also compatible with Apple’s Find My app.

Instead of relying exclusively on off-the-shelf parts, the company works with a small set of suppliers to manufacture custom components. This way, it can cut out as many middleperson as possible to bring costs down. It’s also a good competitive advantage.

Growing a company like VanMoof is a capital-intensive business. The company has opened retail stores and service hubs in 50 different cities around the world. While the company started in Europe, the U.S. is now the fastest growth market for VanMoof.

With today’s funding round, the startup plans to double-down on its current strategy. You can expect updated bikes with refined designs and more custom parts. You can expect more stores and service hubs around the world. And you can probably expect more online sales as well.

In a statement, Taco Carlier, co-founder and CEO says, “It will help us get 10 million people on our bikes in the next five years. So far, there are 150,000 people using VanMoof bikes.”

Today’s investment shouldn’t come as a surprise. The coronavirus pandemic has boosted plans to transform European cities — and prioritize bikes over cars.