‘Home' wasn’t built in a day! Building an abode is a once in life dream for most of us that often originates decades before we lay-down its foundation stone. But for Keshavlal Shrimali, an auto driver who lived in a small tin shaded house with his family in the outskirts of Palanpur (Gujrat), having his own home was more than just a dream. He spent months walking -down to the banks across the city in pursuit of a home loan but to only face rejection due to the instable nature of his income, inadequate credit history and whatnot. He was dejected and had almost given-up his dream while making that enquiry call to SRG Housing Finance a BSE-listed and NHB-registered housing finance company catering to the underserved rural & semi urban population of our country for the past two decades. Within in a matter of seven days the smile was back on Keshav’s face!

SRG Housing’s local field executives paid Keshav a visit on the same day as he made the enquiry call. Unlike the other NBFCs, instead of asking him for the salary & banking statements, SRG Housing executives went down to his place and did a first-hand background verification using its own credit parameters, and most importantly, involving the 'human factor’. The home loan was disbursed within a week, and today, while living in a beautiful home, the entire family is overwhelmed with happiness.

“Such happy faces are the backbone of our success. They provide us with the energy and motivation to focus more on the under privileged & under served sector wherein the average ticket size is around Rs.6-7 lakh. Till date, we have successfully helped more than 7,000 families to own their own homes, among which around 80 percent are self employed people (rest being salaried customers),” asserts Vinod Jain (Founder & Managing Director), SRG Housing Finance. FY2019 was one of the worst years for the NBFC sector that saw organizations retreating completely into the recovery mode by cutting their cost down and stopping the disbursement completely. But with understanding of requirement & urgency of customers and to fulfill dreams of individuals SRG Housing has never stopped disbursement going a leap beyond, the company indeed has risen funds even in such harsh scenario.

A Faster Holistic Experience that Rural India Deserves
SRG Housing however pays the loyalty back throughswift highly professional services. As soon as the well trained local field executives verify and upload the details of the borrower the company’s backend credit team gives approval, leaving out just the formalities of signing the agreement. We are talking about loan disbursements within a week’s time! The use of cutting edge fintech solutions including lead management & mobile platforms, further contribute to the fastest disbursement, in addition to making the whole operations & cashflow
traceable to every penny.

The company also ascertains that the borrower lives up to the agreement. Just like the old Russian adage, ‘it trusts, but verifies’. For instance, if a loan is sanctioned for the construction work, SRG’s executives visit the site on each stage of construction and mark the progress of construction. Once the executive uploads these details, the credit team will again verify the details, before approving the second transaction. “We have a complete check on the end use of the money, because if the end use is genuine, you will always receive the repayment,” adjoins Vinod. In the process, knowing how much the rural population value relationships, SRG Housing provides them with a holistic service experience which they deserve. It starts right from helping less educated people with the preparation of documents and getting all legal approvals as required. “Our marketing employees are all regional people who communicate with our customers in their local language.This makes them feel more connected. We have also provided mourning families time to recover in case of passing away of principal borrower. This way, we have retained our relationships with them,” he adds.

We have a complete check on the end use of the money, because if the end use is genuine, you will always receive the repayment

Being a Housing Finance company it’s interesting the way SRG Housing goes further beyond to ascertain the customer satisfaction. The company has introduced a dedicated customer feedback program called C-Sat (Customer Satisfaction), which is the driving force behind SRG Housing refining its culture constantly. For instance, with all other NBFCs, customers are called up to the office a dozen times in the name of documentation. But with SRG, the executives go down to the customer’s doorstep to collect the documents. Since the company also provides online EMI payment option, the only time customers are required to visit the office is when they sign the agreement. Today, the company majorly deducts all the EMIs through ECS channel, which is also a strong testament to the successful awareness the company has created among its customers. Cultivating banking habits helps in financial inclusion, habit of savings and upliftment of lifestyle of people in rural area.

A Mission with a Great Vision
Winding back a couple of decad, Vinod incepted SRG Housing in the year 1999. His mission had a strong vision fulfilling the home ownership dreams of those who live in rural and semiurban areas. Their dreams always remained unfulfilled, since the majority of them are first time borrowers with no formal credit history and they get left out from banks and mainstream financial institutions’ radar. The company commenced its operations from Rajasthan after getting registered with NHB. It came out with an IPO in 2012 and was listed on BSE’sSME Platform, being the first company in Rajasthan. After three years in 2015, SRG Housing migrated to Main Board of BSE Limited from SME Platform being the first company in India to migrate. In the year 2016, it started its corporate office in Mumbai.

Having grown from strength to strength over the years, SRG
Housing today has established itself as a leading financial services player in central and western India with a total of 32 branches. Excellent management strategies deployed under the aegis of Vinod has acted as a catalyst in this growth. The strategic decisions like introducing different credit policies, not funding long term assets with shorter term liabilities (which leads the company in maintaining ALM position across all buckets with no cash flow mismatch), following the practice of maintaining loan to value (LTV) below 50 percent and focusing on reducing the cost of funds by diversifying the borrowing source are only a few among them. The proactive decision making has paved its path to the future.

The Future is Shining
The transformative interventions by the government in recent times have provided a much-needed stimulus to the real estate sector as a whole. This being a catalyst, the NBFC sector surely is picking up, giving further room for SRG Housing to unfurl its expansion strategy, which is purely focused on reverse calculation. Remember, we are more familiar with NBFCs that launch their fancy looking branches with heavy investment and bottle it eventually. Unlike this, based on the target estimations, SRG Housing does the risk analysis first, before determining what needs to be the book size, and focuses on faster disbursements and quality services rather than fancy-looking offices. No wonder most of its branches turn profitable within the first month itself. “We are under taking a major overhaul in technology. We are now underway with our ‘SRG SRAJAN Program’, which is a series of standardization measures to help us streamline all our operations. With our vision 2022, we intend to grow our loan book to Rs.1,000 crore and our branch network to 70,” concludes Archis.

KEY MANAGEMENT:
Vinod Jain, Founder & Managing Director
Vinod has unparalleled experience in the financial services industry. With his deep financial prowess and effective team management capabilities, he has engineered the growth of SRG Housing with utmost honesty and integrity. Going forward, while believing in sustainable growth with long term strategy, he envisions making the company the next big participant in the Housing Finance industry in India.

SRG Housing Finance in Spotlight:
•Provides rural and semi urban housing finance for single unit houses which are being purchased or constructed by people having low and medium income

•Successfully helped 7,000+ families to own their own homes

•A robust credit appraisal policy in place, in addition to collection monitoring and recovery mechanism that ensures high efficiency at all levels along with service quality. 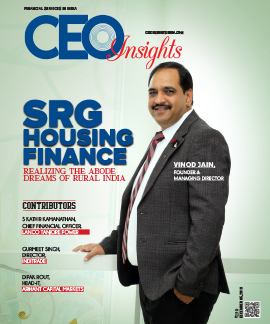