Farmers' Unions Welcome SC Order, But to Continue with Their Protests until Laws are Repealed 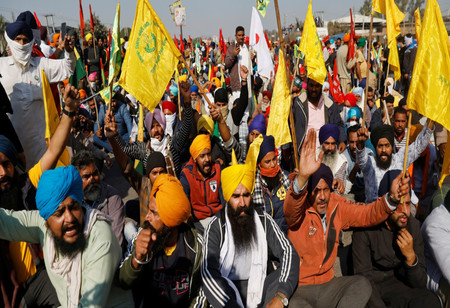 The Supreme Court had pulled the Centre for its handling of the farmers protest against the new farm laws. It said that ‘it is extremely disappointed’ with the way negotiations between them were going. The apex court further said on Monday that it will constitute a committee headed by a former Chief Justice of India to resolve the matter.

The farmers welcomed the Supreme Court’s verdict to stay the implementation of three farm laws but said that they would not call off their protest until the legislations are repealed.

The umbrella body of around 40 protesting farmer unions, Sankyukt Kisan Morcha has called a meeting later in the day to decide the next course of action.

The farmer leaders said they are not willing to participate in any proceedings before a committee appointed by the Supreme Court, but a formal decision on this will be taken by the Morcha.

“We welcome the court’s order to stay the implementation of the farm laws, but we want a complete repeal of these laws,” Abhimanyu Kohar, a senior leader of the Morcha told PTI.