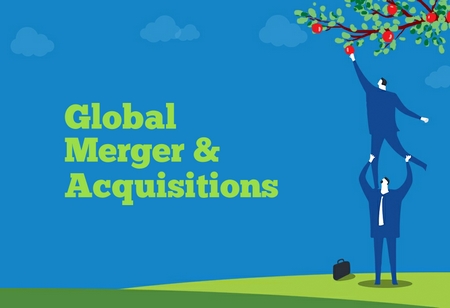 2020 saw a huge surge in global merger and acquisitions (M&A). The global M&A deal value amounted to $3.6 trillion in 2020, which is five percent less compared to similar period in 2019. Despite the pandemic taking a toll on the global economy and the first half witnessing one of the worst seasons, the second half of 2020 turned out to be the glorious second half in the history ever.

According to the research data analyzed and published by Sijoiturahastot, the global M&A deal value amounted to $1.2 trillion during the first half of the year. It was 41 percent lower compared to the previous year same period, and was the slowest first half since H1 2013.

However, when it comes to total number of deals sealed, H1 2020 saw a 16 percent decline, marking a six-year low. However, a strong H2 2020 helped the year from becoming the worst. The second half of 2020 saw two consecutive quarters of deal value surpassing $1 trillion. In total, the value of the M&A deal activity in H2 2020 totaled $2.4 trillion.

H2 2020 saw nearly 88 percent uptick, marking the strongest consecutive half-year increase in history. The previous record was set in the second half of 1997 when there was a 46 percent increase.

APAC saw a 15 percent increase, with deal value amounting to $871.5 billion up from nearly $758 billion in the previous year, the strongest YTD performance for deal making in the region since 2018.

Technology was the leading sector in 2020, posting a 49 percent uptick to reach $679.2 billion. The sector accounted for a remarkable 19 percent of total M&A activity YTD.

It was followed by financials with a total deal value at $489.6 billion, a six percent decline YoY. The next in line was energy & power sector which accounted for 12 percent of deal activity despite 13 percent YoY decline.

EY expects that this stronger than expected H2 rebound in global deal making is set to continue into 2021.
Read More: