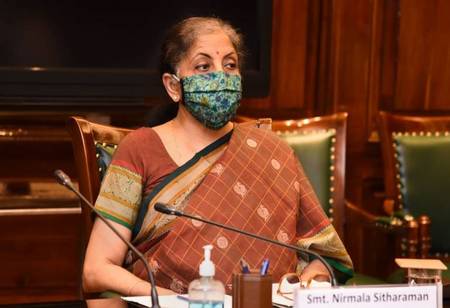 While addressing the plenary meeting of the International Monetary and Financial Committee (IMFC), the ministerial-level committee of the International Monetary Fund (IMF), via video conference Finance Minister Nirmala Sitharaman has hinted that the country’s economy is been recovering by following a V-shaped pattern in various high-frequency indicators. This economic progress is occurring with the government’s measures to revive economic growth that had been badly affected by the pandemic outbreak.

She further said, that several lower-income, as well as developing countries, have battled it to ensure and protect the livelihood for millions from slipping below the poverty line. She also pointed out that the recovery and rehabilitation efforts in these countries must not be permitted to be undermined in any manner.

Sitharaman also outlined the measures under the ‘Aatmanirbhar Bharat’ package to boost up the speedy recovery of the country’s economy.
She also mentioned that the V-shaped pattern of recovery is being seen in several high-frequency indicators, including manufacturing PMI that reached the highest level in the last eight years in the month of September 2020, presenting a strong recovery prospect for the manufacturing sector.

Also, she has stated that to stimulate consumers' expense, measures worth $10 billion have also been announced recently. Additionally, the government has also announced a Rs.73,000 crore package that includes advance payment of a part of wages to central government employees and cash in lieu of leave travel concession (LTC). This step has been taken to stimulate consumer demands and investment to revive the deteriorating economy.

Furthermore, Nirmala Sitharaman has also appreciated IMF's Managing Director Kristalina Georgieva and the IMF for giving a wise suggestion to the economies worldwide. Also, the IMF's assertion that a premature withdrawal of policy support could aid in triggering liquidity shortfalls and insolvencies is relevant.

The discussions at the meeting were based on IMF Managing Director's Global Policy Agenda titled "Catalyzing a Resilient Recovery".
Moreover, the members of IMFC has refreshed the committee on the actions and measures to be implemented by the other member countries to battle Covid-19 and its adverse impacts.

The IMFC assembles twice a year, once during the fund-bank spring meetings in April, and again during the annual meetings in October. The team discusses topics of common concern affecting the global economy and suggests the IMF on the direction of its work. But this year, due to the pandemic outbreak, both the spring and annual meetings were conducted via video conference.