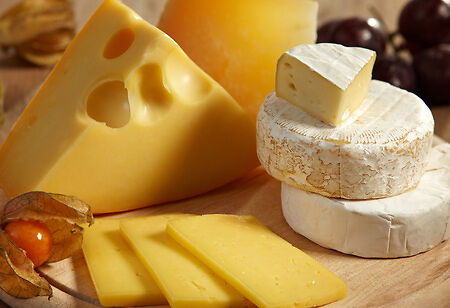 Adding cheese to a warm pot of noodles elevates the flavor, slightly changing the texture of the broth and adding to the aroma. Like its many shapes and flavors, cheese can be consumed as a snack, a taste enhancer on popcorn and pizzas, or enjoyed as a fondue with breads, potatoes and other dips to go along. Cheese can be eaten with any kind of dish and the best part is that it doesn’t need to be cooked. This flexible ingredient is often added in negative remarks as well considering its high fat content.

In certain countries, particularly France, cheese is a star ingredient that appears in most dishes in the menu. There are over a thousand different varieties of cheese that can be relished as is rather than adding it to a particular dish. According to Statista, over 95 percent of the French consume cheese, with 40 percent consuming it everyday. It’s the second most vital edible, after baguette, the French miss the most when travelling abroad. However, it is not the country with the highest production of cheese. Instead, the USA and Germany happen to top the list. What makes this country produce that many varieties of cheese?

The geography, soil, and climate of a region all play a part in the flavor of milk from the cows, sheep, and goats used to make these renowned French cheeses. France boasts a vast range of weather, from the sea coast to rolling grasslands. An authentic Roquefort prepared from milk from sheep grazing in the Midi-Pyrenees will taste very different from one made from milk from sheep grazing on a different salad bar. Hence, every region has its own taste to offer. Try the Époisses de Bourgogne and Boucheron from Burgundy, the Gruyère de Comté or the Vacherin from Franche-Comté, and the Camembert de Normandie and Brillat-Savarin up in Normandy and Brittany.

Additionally, neighbouring countries have also played an important part in shaping France's cheese culture. Spain, Italy, and Belgium are just a few of the nations that share a border with France, and when these cultures meet, the result is a distinct and well-defined cheesemaking history, such as the Comté produced in the country's Alpine area near to Switzerland. Historical strife also played a part in creating cheese-making customs. The Loire Valley is famous for its goat's milk cheese, which was introduced with Arabian warriors when they entered in the 8th century.

Overall, French cheeses maintain a classy reputation and are a sign of appreciation even if a morsel is placed as a side with the main dish.

But who has time to taste test and categorize their favorite kind of cheese among the hundred unique types?

That problem is solved by Appellation d’Origine Controlle’ or AOC, which has granted the highest honour to 45 types of cheese. Under this designation by the French government, cheeses are awarded the finest based on the specific ingredients and age-old processes used in varying regions. This is the current fight among cheese makers.

For instance, if you happen to stumble upon camembert cheese with an AOC, it’s certified that the cheese has been produced from the region of Normandie. Therefore, make sure to look for the special blue and yellow label which has been distinguished by the Apellation d’Origine Controlle’ on the product.

If the cheese makers say that the cheese has been produced from their region using their cows, then the AOC makes sure that cheese makers keep their word. During the production stage, stringent criteria is followed to maintain the‘savoir faire’ of cheese. Due to AOC’s intervention, the traditional cheese techniques are also made sure to be kept alive and passed down through upcoming generations.

The AOC standardization came about during the 15th century with Roquefort, which was administered by the parliament decree. Thereafter, AOC began inspecting wine and butter along with cheese. Wines with this label define a specific geographic origin and production process. Since the label is awarded to cheese, wines and butters it is called Appellation d’OrigineContrôlée (AOC).The objective of the label protects and prevents producers from replicating eachother’s recipes.

Speaking of regions and their weather and land conditions, cheese are also dependent on seasons like fruits and vegetables.

Take Beaufort in the fall. During fall and winter, Beaufort happens to be more grainer and thicker than in summer. This happens due to the seasonal change, when the milk undergoes pasteurization and the result is richer milk.

The same falls true for Camembert, which is said to taste better during spring. During spring season, cows have better pasturage and produce quality milk.

Another is the Vacherin Mont d'Or, a well-known seasonal classic that comes in the spring. Since the 18th century, this wonderful cheese has been manufactured in Switzerland and France, and it has a velvety texture and a delicious powerful flavor. with a silky texture and a delectable powerful flavor. During Vacherin season, you'll see signs for it all around Paris. The best method to eat it is to take off the top rind and eat it with a spoon.

However, a recent problem with Vacherin was traced back to listeriosis bacteria detected at a Swiss producer a few years ago, but by the time this was discovered, significant damage had been done to French producers. As a result, importing French vacherin into the US is now forbidden. However, production standards are higher than ever, and it's worth eating if you happen to be in France during Vacherin/Mond d'Or season.

Now this leads to where you can find the best cheese? Is it from the supermarkets or the specific cheese selling shops?

Where to Find the Best Cheese?

Quite often, the French rely on specialist shops in buying fine cheese. As the name suggests, these shops gather around the smaller producers who specialize in making certain kinds of cheese. These shops get their supply of cheese from small farmers or producers rather than factories that produce heaps of cheese. Without doubt, their selection is excellent. Therefore, you are bound to get the greatest variety if you are looking for a specific type of cheese. The shops that specialize in this category are the St. Marcelin or St. Felician,Camembert or Epoisses or more.

These shops basically guide you to get the finest cheese that you are looking for. Like most shops, these shops assist you through a shop assistant, who will not only take in the information you explain, but will also suggest options that sound befitting to your query. But first, it’s important check what kind of cheese do the specialist shops specialize in, since some speicalize in goat cheese, while others with cow. After that, it’s important to let these shops know about the texture and substance of the cheese that you need. For instance, if you are looking for softer cheese and when you are planning to eat it, the shop will laid in packages of Camembert, Brie and others to make sure that the cheese appears to be ready on the day you eat it. This is an important part of the food adventure in France.

A Rosy Story of Your Roses and Their Reputation Beyond Aesthetics

The Future of Train Travel is Here!