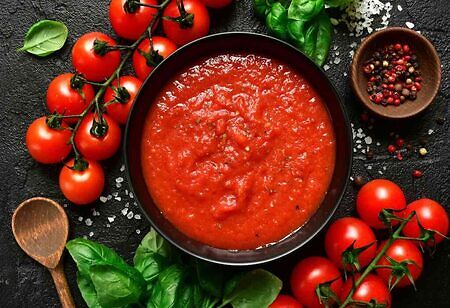 Making Gala Gala or Kul Kul, Apple butter, dumplings and tamales with each family members taking on specific roles, sharing stories in the process and sitting down together for a nice warm bowl of goodies is what ‘food brings people closer’ means. Chances like these allow for exchanging passing down techniques and learning among the older and younger generations. Even the tomato sauce hails from such a family food tradition to Italian families.

Homemade tomato sauce is the star ingredient for most iconic Italian dishes like the pizza, bruschetta, pasta, spaghetti and many others. However, it actually took about 200 years for tomato sauce to become the popular item of Italian cuisine.

According to history, tomatoes were brought into Europe by the Spanish from South America in the 1500s. This was an ember-roasted tomato sauce, salsa di pomadoro alla Spagnuola, with onions, chile, and thyme, served with meat. Since they ruled Naples and Sicily during the 16th and 17th centuries, the inclusion of tomatoes eventually began to roll into the Italian kitchens. Then, in the 1800s, Italians began consuming tomato sauce with pasta! The first recorded recipe for spaghetti with tomato sauce was published in 1837! The 19th centurywas when the real deal of cultivating these fruits in Italy set off.

Today, there are about 300 varieties of tomatoes cultivated in Italy, with 20 used in sauce preparation. Among these the San Marzano is the most famous tomato used in cooking sauce, salsa di pomodoro in Italy, but many also use fresh or canned cherry or datterini tomatoes among other varieties. Additionally, depending on the region the recipe of tomato sauces vary.

In Southern Italy, alla marinara is traditionally made with olive oil, garlic, and basil. Again, there are marinara sauce variations that comprise ingredients such as onions, oregano, white wine, parsley, and pepperoncino (red chilli pepper). In other parts of Italy, tomato sauce is made with finely chopped onions, celery, and carrots, a classic Italian soffritto. It serves as the foundation for many sauces, soup, and stewed meat dishes. Now let’s take a look at the process of preparing this traditional family food.

Every family member has a precise job that is decided from the start: who is in charge of buying or planting the tomatoes, who picks them, who cooks them, and who blends them.

The first step is inspection by checking for marks or softened areas and neatly slicing off them. Tomatoes which are over ripe are discarded after extracting stems and green leaves which can be used later.

Third step, the tomatoes are dropped into a large pot and are boiled until the skins loosen for easy peeling. Once the water temperature is safe or endurable to handle, the tomates are picked or scooped using a straining ladle and are diced into halves. Now is the time to take the manual press or automated machine for the next step.

These machines take care of the deseeding and peeling off the skins to separate the pulp, with one outlet flushing out the seeds and skins, while the other with the pulp. Now you have a bunch of tomato pulps that can be ground into a fine paste or puree.

But be careful not to overfill the machines or hopper with a lot of tomato pulps. Instead take a handful or just three-quarters for every round. Now start spinning the handle of the machines to separate the skins and seeds, while the pulps are churned into a puree. In case a certain amount of pulps remain immovable inside the machine, all that’s needed is a plunger of some kind to push those tomatoes down until all are mashed.

Like most fruits that contain excess water, boil the tomato puree to allow the puree to thicken while the unnecessary water evaporates. Now take this puree and pour it into a another bowl and simmer the flames, to prevent the puree from getting burnt, to achieve the desired consistency required for the sauce. It’s important that the consistency should be thick but runny, with absolutely no pools of water on the surface of the sauce. At the same time, it should not be as thick as tomato paste. Much concentration is needed here.

Now that the sauce is ready, it’s time for the jarring process. But first, a basil leaf should be placed inside each jar before pouring the sauce and be careful not to get burnt as the sauce may be still hot. Therefore, it’s advisable to use a funnel to prevent such accidents.

Then stack the sealed jars in a suitable sized pot and pour water covering till the head of the lids. Once the jars are immersed in water, cover the pot with a lid and boil for about 35-40 minutes for 500ml jars and 40-45 minutes for one litre jars. This process helps in the preservation of the sauce. If any jars have opened while submerged in water, it’s recommended to discard these jars.

Then pick out the jars once the heat of water has subsided and set them aside for cooling completely overnight.

Next, check whether the jars are tightly sealed by pressing the lid's center down. If you hear a pop, it was not securely sealed and should be thrown for safety concerns. If no pop is heard, the lid can be tagged with the processing date and stored in a cabinet or in a cold area until ready to use. These should be consumed within six to 12 months, depending on the quality of the tomato sauce and storage circumstances.

Let’s check the market of how the production of tomatoes appear in Italy this year.

On the downside, climate change is anticipated to flip the production of tomatoes grown in open fields, since they are exposed to environmental change. This is bound to affect the production of tonnes of tomatoes in canned products which are widely used around the world. In fact, Italy, among the three major tomato producing nations is said to witness a decrease in the fruit’s harvest due to greenhouse emissions gravely impacting climatic conditions.

Singapore’s Fashion Brands Are Going Green; Here is How