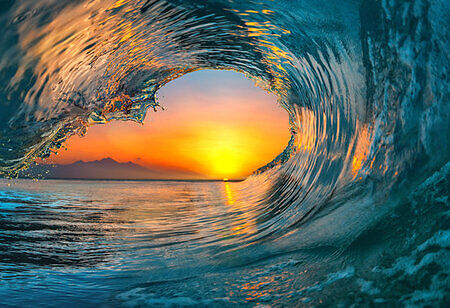 When it comes to renewable energy, many of us have heard about solar energy, wind energy, etc., which are used all over the world to maintain favorable climatic conditions. Ocean wave energy, or just Wave Energy, is another type of ocean-based renewable energy source that uses the power of the waves to generate electricity. Unlike tidal energy, which uses the ebb and flow of the tides, wave energy uses the vertical movement of the surface water that produces tidal waves. The strong waves transform the periodic up-and-down movement of the ocean waves into electricity by placing instruments on the sea surface that grab the energy produced by the sea waves and convert the mechanical energy into electrical power.

IIT Madras researchers have developed a system that could produce electricity using energy from sea waves. The model, dubbed Sindhuja-I, was arranged by the researchers about six kilometers from the coast of Tuticorin in Tamil Nadu, where the sea has a depth of about 20 meters. Sindhuja-I can currently produce 100 watts of energy. It will be used to produce one megawatt of power in the next three years.

The ocean can be viewed as a vast reservoir of energy transferred from the sun to the ocean, and waves carry the transferred kinetic energy across the surface of the ocean. Then waves are actually a form of energy, and it is that energy, not the water, that travels along the surface of the ocean. These waves can travel (or propagate) long distances across the open ocean with little loss of energy, but as they approach the coast and become shallower, they slow down and grow in size. Eventually, the waves hit the shore, releasing vast amounts of kinetic energy that can be used to generate electricity. By capturing this energy, the wave motion is converted into mechanical energy and used to drive a generator. The technology used to capture this wave energy is in many ways similar to tidal and hydroelectric power. The kinetic energy of the shaft rotates a turbine attached to the generator, producing electricity. However, the open ocean can be a stormy and violent environment, resulting in wave energy machines destroying the very energies they are designed to capture.

According to Abdus Samad, who led the research, is a professor at the Department of Ocean Engineering at IIT Madras, currently, if someone wants to power a city like Chennai or part of it, it is very expensive to do so with wave power and much cheaper using conventional energy sources. For remote applications, such as offshore locations, the cost of transporting power across the ocean could be higher than generating it from waves on-site.

The Sindhuja-I system consists of floating buoys, girders, and electrical modules. The buoy moves up and down as the waves roll up and down. In the center of this buoy is a hole into which the spar fits. The spar is anchored to the seabed and prevents waves from moving it. However, when the buoy moves and the spar does not, the wave creates relative motion between the two. This relative movement is used by generators to generate electricity.

However, building such a complex system at an offshore site presents its own challenges. For example, the amount of energy produced from wind energy varies from day to day and year to year due to climate change.

Wave heights and periods vary at different times of the year. It's okay if the plants don't produce energy in mild weather. But the key is to make sure the system can withstand bad weather. It doesn't make sense to invest a lot of money in the system if bad weather washes it away.

So, in November, when the IMD (Indian Meteorological Department) issued an emergency alert for districts in Tamil Nadu, researchers also tested the system. The researchers are very pleased that the system performed so well and was not affected by the difficult conditions.

As this system is still in its early stages, there are currently no devices using the power generated by this system. The research team plans to have a remotely operated desalination system and surveillance cameras on site by December 2023. Further tests are also planned to better understand how to handle weather-related fluctuations in power production.

This wave energy system has emerged at a time when the potential for harnessing waves to generate electricity is gaining increasing attention around the world. This year, the US Department of Energy would award $25 million in grants to companies demonstrating technology that can use waves to generate electricity. The European Union also wants to meet this 10 percent of the region's energy needs from ocean energy by 2025.

The IIT Madras researcher's wave energy generator uses a technology called 'point absorption wave energy converter,' which is just one of many being developed by companies around the world. The world's first grid-connected wave energy device, deployed in 2000, Islay LIMPET, uses a land-based device that generates electricity using oscillating water column technology. It was discontinued in 2018. But researchers believe that such grid-scale technology is still a distant dream for India's coast.

A combination of factors is driving up the prices of oil, gas, and coal, leading to a global energy crisis. The global recovery from COVID-19 has increased the energy demand but stagnated supply. Reasons include declining coal production in China, sluggish investment in oil production in the US, and declining gas production in Europe. In addition, there were transportation bottlenecks around the world.

According to the International Energy Agency (IEA), Ocean power is not currently on track to play its part in helping the world reach carbon neutrality by 2050. To achieve this goal, ocean power generation needs to grow an average of 33 percent a year between 2020 and 2030.

A New World of Innovations in Event Management Services

A Frame for the Future: Dynamics of Modern Day Photography