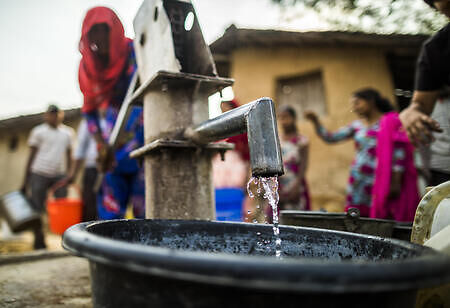 Brawls over water are common in most parts of India. The economically backward charge towards the fickle-brained municipal taps, water supply, or dash buckets to get their fill from government tankers that visit areas occasionally. In certain rural parts, women still have to walk miles in the scorching sun bearing heavy water pots on their heads. Despite many governmental measures to eradicate water shortage, many households remain untapped to water connection. While holding 18 percent of the world’s population, with only four percent access to its freshwater resources, India is the most water-stressed country in the world.

Monsoon makes planning the country’s water budget even worse, as certain parts suffer from poor stormwater drain management, making it prone to floods. In the past, the government rolled out Hydrology Project Phases I and II, as well as the National Project on Aquifer Management, keeping an eye on freshwater resources on a real-time basis. In vain, these projects couldn’t reach desired results due to the lack of nationwide coverage.

However, installing hope today is the recent National Hydrology Project that facilitates prudent water management while ensuring sustainable groundwater consumption across the nation. How far have these projects come, and will they eradicate the water crisis of the nation?

The First Hydrology Project Phase I and II Created a Database

During 1995-2003, the government first created a comprehensive database for the hydrological system through the Hydrology Project Phase I (HP I). This project laid down hydrological developments for Andhra Pradesh, Chhattisgarh, Gujarat, Karnataka, Kerala, Madhya Pradesh, Maharashtra, Odisha, and Tamil Nadu. This project killed two birds with one stone by building 916 river gauge stations, 7,889 observation wells, and 436 hydrometeorological stations and collecting data from them. Later, it created a comprehensive database by developing a surface-water data entry system, a hydrological modeling system (HYMOS), a water information system for surface water data online management, groundwater data entry software, and a groundwater estimation and management system.

HP II did the same, except with 13 states, and it did a real-time data analysis instead of manual data collection. The difference here is that it focused more on floods than groundwater management.

National Project on Aquifer Management: Overseeing the Quality and Quantity of Groundwater Resources

Starting in 2012, this project has been dedicated to groundwater mapping, keeping the quality and quantity in check for groundwater resources on a real-time basis. The aim was to quantify existing groundwater resources by analyzing consumption, determining future demand, and making institutional arrangements for participatory management. Although this project was executed regularly under HP I and II by the Central Ground Water Board ( CGWB) and the state groundwater and drinking water supply departments, the information was insufficient for comprehensive groundwater management. The aquifers were identified and mapped at a micro level.

The aquifers were mapped up to 200-meter depth in hard rocks and up to 300 meters in sedimentary areas, and the aquifer geometry was redefined to a scale of 1:50,000 and 1:10,000. For the major aquifers in the region, studies were assessed in the pilot areas examining the nature and timeframe of water consumption. Additionally, hydrostatic heads were examined through shallow dug wells and piezometers. To record changes in the pressure heads of piezometers, the wells were fitted with pressure transducers. By analyzing the phreatic and piezometric heads, groundwater flow patterns were mapped out.

Further, field data were collected, and digital maps indicated groundwater levels through the information compiled by the National Remote Sensing Centre. For this mission, three different groundwater mapping techniques were employed, such as airborne, ground-based, and logging of borewells. This information was vital for dilating the areas of potential and non-potential areas of aquifer zones, as well as for the comprehensive modeling of the entire aquifer system.

But let’s look at how the new project is making a difference compared to its predecessors.

The NHP aims to establish a complete system for trustworthy data collection, storage, collation, and management related to water resources. Unlike the earlier hydrological projects (HP I and II), which only covered 13 states, it spans the entire nation.

India is getting over 6,000 sensors implanted to collect information on its rivers, lakes, and reservoirs. 1,600 additional sensors will monitor subsurface water. All of them will be wired into the mobile phone network and broadcast data in real-time, including water levels and environmental factors like rainfall, humidity, and air pressure.

Anyone can access that data because it will be provided on a single, centralized, web-based system. Software that can analyze the data and provide decision-makers with meaningful information is being developed in the meanwhile.

Rather than building a comprehensive hydrological database, the project is expected to oversee water resource management while ensuring equitable use of water through real-time flood forecasting. On top of that, it will look into reservoir operations and groundwater positions. While at it, it is also said to facilitate integrated water resource management through the collation and management of hydrometeorological data on a real-time basis.

The NHP also aims to improve the ability of federal, state, and local organizations to manage water resources more effectively. The implementation of information systems and the application of cutting-edge technology like remote sensing will make this possible. The project's ultimate goal is to assist in the assessment of water resources through the gathering of scientific data and the prioritization of water allocation and use.

The initiative is anticipated to improve data storage, analysis, and distribution through the NWIC with effective implementation. It is anticipated that flood forecast lead times will grow from one day to at least three days. Furthermore, the research will support a precise evaluation of the groundwater and surface water resources in river basins. Additionally, it will help the authorities in the allocation and prioritization of the fast-depleting water resources.

India needs a long-term solution for water resource management, despite the fact that numerous steps are being taken to address the current water crisis. These initiatives will equip the authorities to take corrective action far in advance through the real-time monitoring of resources.

Future metropolitan local bodies will be better equipped to advise domestic, industrial, and commercial users on the state of freshwater supplies, thanks to the availability of information. They can plan, develop, and manage the usage of water resources more effectively with its assistance. The government's capacity to successfully use the data gathered for controlling future water crises will determine the project's impact.

The Shoe Shiners of Mumbai Need Help to Shine Again