Prajodh Rajan: A Leader that Believes in Constant Learning

Prajodh Rajan was aware of the huge transition he was undertaking when he decided to switch over from Orix Corporate Fleet Management to the education sector. Entering into an unchartered territory, the EuroKids founder displayed an attribute of a self-reliant leader and went forward to build one of the most prestigious chains of preschools in India.By establishing the institute on the foundations of ‘Child First’ ideology, the founder laid its first brick in 2001 and eventually saw it rise to 900+ franchise strong establishment, paving its way to build a better future for the tiny tots.

Banking on Opportunity Responsibly
In the year 1997, when there was a huge dearth in the pre-schooling space, Prajodh saw this as an opportunity to create an offering that would leave a positive impact on the coming generations. Greatly influenced by Howard Schultz, CEO of Starbucks Coffee whose idea behind setting up the company was not to sell coffee, but to create an unparalleled and superlative coffee drinking experience, Prajodh laid the very foundation of the preschool to create it as the second home of every child enrolling there. To ensure this, he created the philosophy of ‘The Why We Do...Of The What We Do’ as the guiding principal for teachers and
employees to build a child’s personality. He explains, “The belief in the ideology and the core systems of the organisation will ensure that people unify to achieve the objective as desired. The idea of working in unison with a concerted effort to achieve a common objective is the driving force behind achieving goals. This common objective is that gets people with different skill sets to work towards our common goal the holistic development and nurturing of young minds”.

Prajodh is highly sensitive to the tenderness and vulnerability of the young students and refuses to downsize on their safety. He assures, “From the onset we have given great focus to provide a safe school environment at EuroKids”. The edupreneur prioritized the little ones’ safety throug h child friendly furniture (along with a venture with Space Wood), and safe toys &environment amongst other measures, which is audited & certified by Bureau Veritas, an international organisation that specialises in conducting audits and verifying safety standards. Prajodh proudly remarks, “EuroKids is the only Indian preschool to have been credited by Bureau Veritas”. To ensure further safety, each staff, whether teacher or support staff, are hired post thorough background verification along with previous employer verification and are further
specifically trained to handle young children.

The home like school also stands in a different light owing to its founder who, as anardent believer in ‘out of the box thinking’,conceptualized the unique EuroKids pedagogy. This involves a curriculum based on the findings by the Centre on the Developing Child at Harvard University and inclusion of the specially crafted programs, EuroGym – that aims to maintain the health and fitness levels of the child.He proudly remarks, “Initiatives such as these which have long standing impact are the ones which separate us from others in the space and are the tangibles of pre-schooling the EuroKids way!”

As leader of one of the biggest preschool chain in India, Prajodh believes that he is supposed to lead the way into the path for constant innovation that will help establish EuroKids expertise in early child care education. An inspiration for thousands, Prajodh firmly believes in being guided by a mentor or a business coach. He states, “How does one get the benefit of acting upon years of wisdom, without actually having experienced those years? The answer to that lies in finding a business mentor who assists you in travelling the path that you are to undertake. I am fortunate, to be able to delve into the wealth of experience of Pratap Nambiar, Executive Chairman, Thought Perfect Pte Ltd, who is my business coach, confidante, source of great inspiration and wise counsel”.EuroKids today is the Mecca for all those seeking quality early child care education and this institute, spread across three countries, 350+ towns and nurturing more than three lac children is making confident strides into the future all because of Prajodh’s diligent and assertive guidance, nudging it forward. 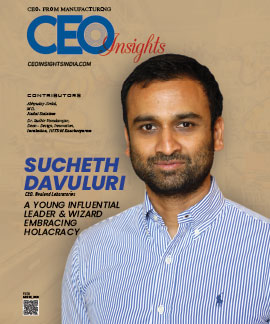